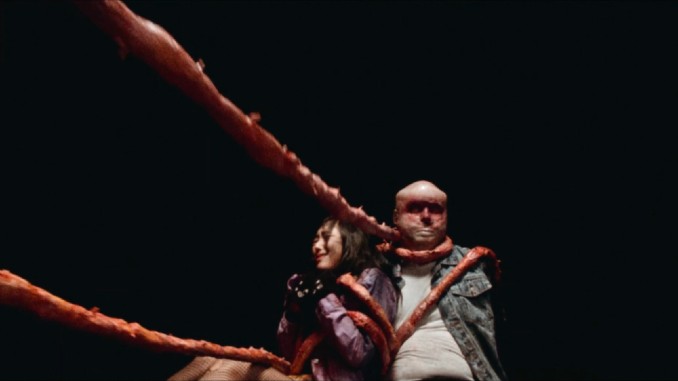 This film was screened at Fantastic Fest

Forget sex, drugs, and rock and roll: GIVE US WORMS!

Boasting one of the greatest titles in all of genre cinema, I truly wanted to love “All Jacked Up and Full of Worms,” a gross-out, demented, sleazy horror trip for the deranged (and preferably high). I cannot imagine a feasible quantity of drugs that would make someone enjoy this psychedelic journey for degenerates, but at least it’ll have audiences talking.

The story follows Roscoe (Phillip Andre Botello), a maintenance man at a decrepit motel of ill repute in Chicago. After discovering a secret stash of hallucinogenic worms, he decides to take the path of self-destruction and consume the soft and wiggly invertebrate. Roscoe soon begins experiencing visions from the giant King Worm and eventually meets major moped fan Benny (Trevor Dawkins), who has devoted his life to manifesting a baby from an inanimate sex doll. They do even more worms together before embarking on an odyssey of sex and violence that is one of the weirdest and most disturbing things I think I have ever seen.

Clocking in at just over an hour, the film is still too long. Some may compare the movie to the perverse, boundary-pushing projects from the legendary underground cinema auteur John Waters, but writer / director Alex Phillips doesn’t provide much substance to back up the whackadoodle script, nor does he create a solid enough foundation for the building of a future cult classic. It’s a fair entry into the shock-horror genre, but it’s not an enjoyable ride. I suppose this film is made for watching while high, because I cannot imagine a mainstream audience heading to the theater to view worm-eating sex.

I suppose if you’re looking for something truly outrageous, “All Jacked Up and Full of Worms” may be just the movie for you. Otherwise, there’s not much here (cannibals and graphic disembowelings not included).