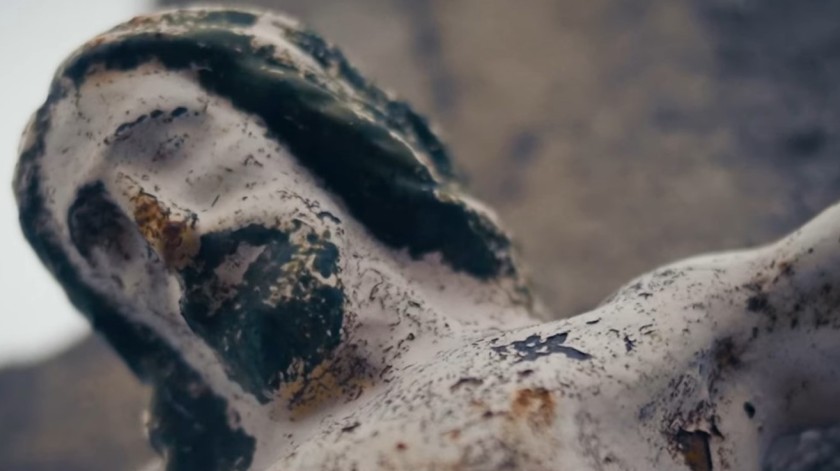 This film was screened at Fantastic Fest

It’s a documented fact that a human’s imagination can often be more disturbing than reality, as we have the ability to create a picture of things in our heads that may not mirror what is happening in real life. It’s the foundation for the challenging, unnerving film “Razzennest,” an auditory horror project that proves sound can be just as scary as visuals. Writer / director Johannes Grenzfurthner doesn’t need to show the audience any bloody, brutal violence – he only needs to describe it.

The film tells the story of pompous director Manus Oosthuizen (Michael Smulik), who sits down with podcast host and Rotten Tomatoes critic Babette Cruickshank (Sophie Kathleen Kozeluh) to discuss his latest feature documentary, “Razzennest.” They are joined by members of the filmmaking crew to record an audio commentary for the movie, and everyone is the target of Oosthuizen’s condescension. The director’s patronizing attitude notwithstanding, the meeting seems innocuous enough — until a sinister element is exposed and the real horror begins.

The script is brainy in an indie film lovers sort of way, as it deliciously pokes fun of podcasters, internet critics, snotty cinephiles, and stuffy film festivals. Smulik is particularly hilarious as an egotistical director whose arrogance knows no bounds, so it’s all the more satisfying when he gets his comeuppance.

The film succeeds in pushing buttons and boundaries, with in-your-face situations and some truly repulsive plot points. Grenzfurthner rattles viewers with writing that comes from a very dark place, all while the accompanying visuals amount to a slide show of photos. The landscape shots are extremely repetitive, but if you’re watching this film and focusing on what your eyes see rather than what your ears hear, you are missing the point.

The film has strong “The Blair Witch Project” vibes with a super low-budget appeal. It’s a gimmicky idea for sure, but it’s also a brilliant one. From the vivid and violent descriptions to the bloodcurdling screams, “Razzennest” is the stuff of nightmares.