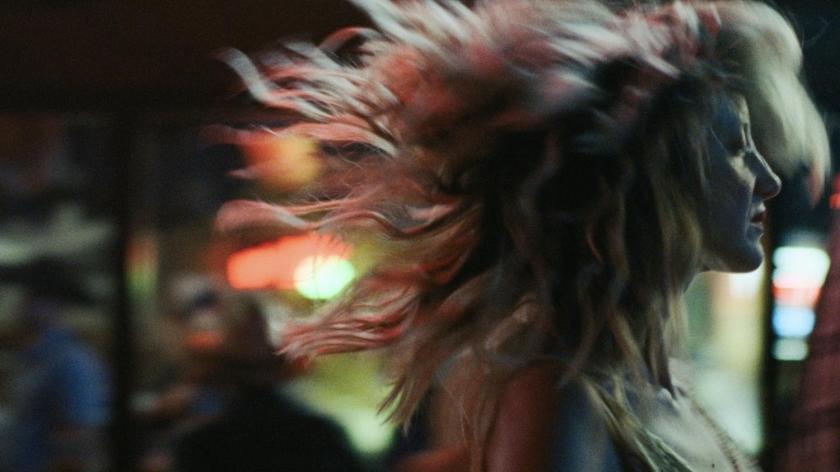 “To Leslie” is a sad but moving portrait of a single mother in Texas (Andrea Riseborough) suffering with an addiction to alcohol. Six years after winning $190,000 in the lottery, the money is gone, her friends and family have moved on, and Leslie has been evicted from a fleabag motel where she neglected to pay her rent on time. Faced with living in the street, she calls her estranged son James (Owen Teague) and goes to stay with him.

Even after laying down the ground rules, James finds booze hidden in his apartment and sends his mother on her way. She gets bounced around and finds shelter with old friends (Allison Janney, Stephen Root), but it’s more of the same. She can’t stop drinking, and she’s kicked out yet again. It’s only when a kind employee of a roadside motel (Marc Maron) gives her a job that Leslie finally has a real opportunity for one final chance at correcting her life.

Ryan Binaco has written an intimate story that creates empathy for a person that most of us would rather ignore. Leslie has been cast aside by her friends, family, and society, and has yet to hit rock bottom.

There’s a realism that hits home, especially if you have any personal experience with addicts. The film nails an accurate portrayal of alcoholism and addiction, especially from the point of view of those who love them. It’s heartbreaking to see Leslie’s friends and family view her with such skepticism and anger. You want to believe what Leslie says, to believe that she’s changed, yet you still know not to trust. That desire to believe can be powerful, and Binaco and director Michael Morris really capture that in this film.

While this may sound like just another film about a “no-good drunk” who ruined their life, it’s different because of Riseborough’s phenomenal performance. The actor excels in unglamorous, demanding roles like this, and the film wouldn’t work nearly as well without her. Where many would choose to go over the top with exaggerated theatrics, her understated turn gives a humanity and sympathy to both her character and the story. Leslie isn’t a bad person but she’s unlikable for the majority of the movie, and Riseborough makes her sympathetic and relatable. It’s not easy to so wholly embody a character and present both sides like that.

It’s sad to think there are so many women and men out there just like Leslie, and sometimes all a person needs is a little kindness to help get their life back on track. Sentimental and inspiring but not cloying, the messaging in “To Leslie” is about second chances and the truth that it’s never too late to turn around a life filled with mistakes and regret.