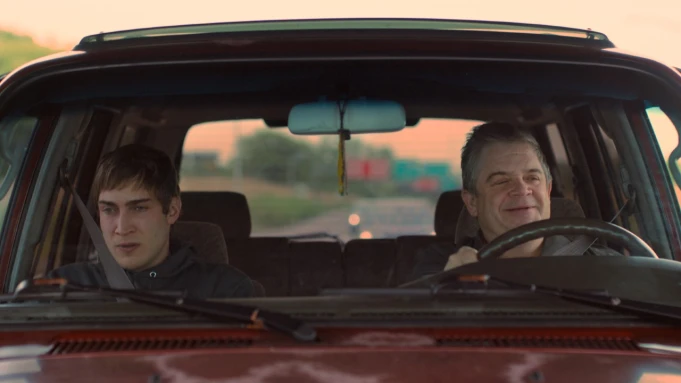 “I Love My Dad” is a cringey film about an estranged father (Patton Oswalt) who willingly catfishes his depressed adult son (James Morosini) in an attempt to reconnect. I know the story is highly personal (it’s based on writer / director / actor Morosini’s true life experience), but it doesn’t make for a good movie. In fact, this is one of the most off-putting films I have ever seen.

Franklin is fresh out of rehab after an attempted suicide, and he wants nothing to do with his loser dad, Chuck. He blocks his old man on social media, but Chuck is concerned about his son and doesn’t like being left in the dark as to what’s going on in his life. So he finds the profile of his favorite diner waitress (Claudia Sulewski) and impersonates her on social media.

Chuck takes this deception so far that Franklin begins to fall in love with this imaginary girl. Yikes. The eventual big face to face confrontation in the diner is extremely uncomfortable and disturbing, and it’s something I never, ever want to watch again.

It’s hard to get over the fact that Chuck is an awful human being. You can’t convince me otherwise. His son is suicidal and fresh out of rehab, and this is not an okay thing for a dad to do to his son, regardless of his mental state. It’s not even understandable. I would never talk to this man again if he did this to me or to anyone I knew, for that matter. This is why the sentimentality doesn’t work in the story.

The story is serious, and it’s so sad because it’s played straight. Maybe if this had been a comedy, it would’ve worked better. The tone of the film is at odds with itself, as it’s sometimes presented as a rom-com but then as a serious family drama.

Just because the movie has a couple of recognizable names attached doesn’t automatically equate it with quality. It’s just too much of a hurdle to get over what an unlikable man and terrible father Chuck is. The finale drives home the fact that none of these people care at all about who they hurt or how they hurt them. What a shitty family indeed.