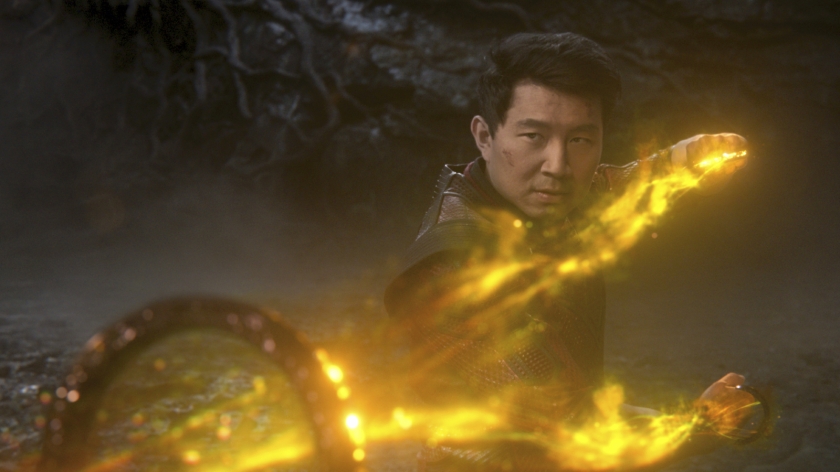 “Shang-Chi and the Legend of the Ten Rings” is a fresh superhero origin story that deserves great success at the box office. This visually dazzling film has a substantial scale (with its $150 million budget), an engaging cast with a terrific chemistry, an emotional father / son dynamic that drives the story, and exciting, inspired action sequences combined with special effects that will satisfy those looking for a traditional blockbuster Marvel experience.

Thousands of years ago, Xu Wenwu (Tony Chiu-Wai Leung) finds a set of weapons known as the ten rings, which grant the user immense power and immortality. Wenwu uses his strength to form an army that assists him in overthrowing governments and conquering kingdoms over the course of many decades. In the 1990s, Wenwu begins a search for the mythical village of Ta Lo, where he meets guardian Ying Li (Fala Chen). The two fall in love and have two children, Shang-Chi (Simu Liu) and Xialing (Meng’er Zhang). Fast forward to present day, where Shang-Chi (who now goes by the Americanized “Shaun”) and his best friend Katy (Awkwafina) are working as valet parking attendants in San Francisco. When the duo are attacked by henchmen from the Ten Rings, they discover that Xialing may hold the key to their safety, and they must travel to Macau to search for her before it’s too late.

The plot keeps going from there, with co-writer (and director) Destin Daniel Cretton introducing a large number of characters in a relatively short period of time. It’s not exactly a complicated script, but the inclusion of so many details prevents the adventure from becoming stagnant (and should keep audiences on their toes). There are a few Marvel crossovers thrown in, but their brief appearance is a testament to how strong this standalone story is.

This film marks a milestone in the MCU, with Shang-Chi being the first Asian superhero (and Liu the first Asian actor) to lead a Marvel film. The cast is predominantly Asian and Asian-American. It’s an important advancement towards cultural representation in big budget blockbuster movies, and it’s nice to not only see Asian characters presented with none of the all-too-common stereotypes, but to also watch strong women have their time to shine.

There’s so much to enjoy here performance-wise, from Awkwafina’s slightly restrained comic relief (thankfully, she doesn’t cause a distraction with her usual over-the-top excess), to an inspired cameo from Ben Kingsley, to a bonafide star-making turn from Liu. The film is absolutely perfectly cast, and the chemistry between everyone onscreen reaches optimal levels.

Other elements of the film unite to distinguish this Marvel entry from the rest. There’s a series of elaborate martial arts and fight choreography that creates action sequences as elegant as they are exciting. The stunts are thrilling, including an unforgettable piece that involves a fight onboard a runaway public bus.

The costume design is gorgeous and culturally-appropriate, and the film accurately incorporates elements of Chinese mythology in new and inventive ways. The theme of finding your own strength by facing the pain of your past and learning to know, understand, and accept yourself is one that many who feel like outsiders (or are saddled with regret) need to hear. All of these pieces are assembled in a way that work together so well.

While “Shang-Chi and the Legend of the Ten Rings” easily makes the grade as one of the top 10 best Marvel film to date, it isn’t immune from a bulky grand finale. The huge battle climax overstays its welcome a bit, but it’s hard to criticize a movie with a denouement that features not one, but two warrior dragons.