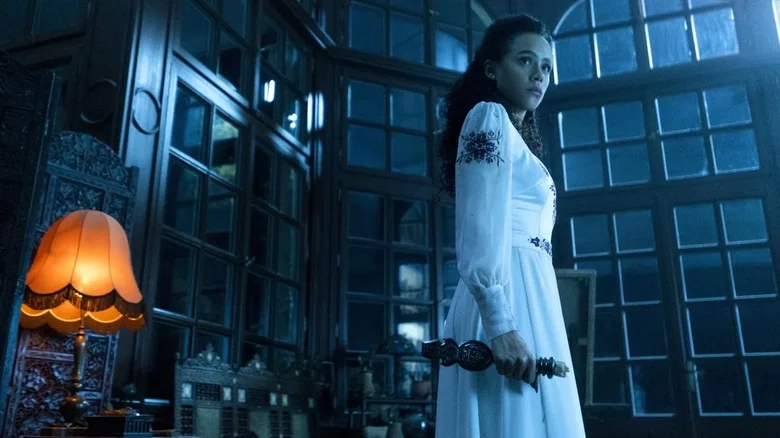 There’s isn’t a whole lot of mystery in director Jessica M. Thompson’s gothic romance “The Invitation,” as it’s easy to decipher that the big “surprise” in the story is that most of the characters aren’t entirely human. You could comfortably dismiss this film as just another vampire thriller that borrows on classic Dracula lore, but the multifaceted themes in the female-centric story give the film a fresh, contemporary feel.

Struggling artist Evie (Nathalie Emmanuel) is feeling alone in the world. Her mother recently died and she has no other known relatives. When she decides to take a DNA test, Evie discovers a long-lost cousin (Hugh Skinner) that she never knew she had, which results in a surprise invitation by her newfound family to a lavish wedding in the English countryside. Evie accepts, embarking on a trip overseas. When she arrives, she’s overcome by the stately mansion and her gorgeous host Walter (Thomas Doherty), soon to be thrust into a nightmare of dark secrets and an unsettling family history.

Writer Blair Butler’s story is told through Evie’s eyes, conveying extremely well how blind a young woman can be when it comes to the allure of elite society. Of course it’s not smart for the heroine to accept a first class ticket to a foreign country from a man she just met, but it’s also believable that she would. The script gives a taste of how women can sometimes feel like they are stalked by a predator, even if the threat comes in the form of a ridiculously good looking man.

Toss those romantic “Twilight” fantasies out of the window: this sexy vampire is no Prince Charming.

Evie is the anti-Bella, if you will, and that’s one of the things that makes her so intriguing. She’s feisty and a fighter, a woman who does not lack confidence and is comfortable standing up for herself, yet she still cannot resist the daydream of being swept off her feet by a rich, handsome stranger. It’s a fantasy that’s been fed to women for ages, but it’s refreshing to see a lead character who refuses to be intimidated.

These ideas add a depth to the film that save it from being a complete disaster, but it still teeters on the edge. The story is too basic and predictable, Thompson relies on an excess of cheap jump scares, and the film is neutered by its PG-13 rating. It’s the intriguing spin that keeps “The Invitation” interesting enough.