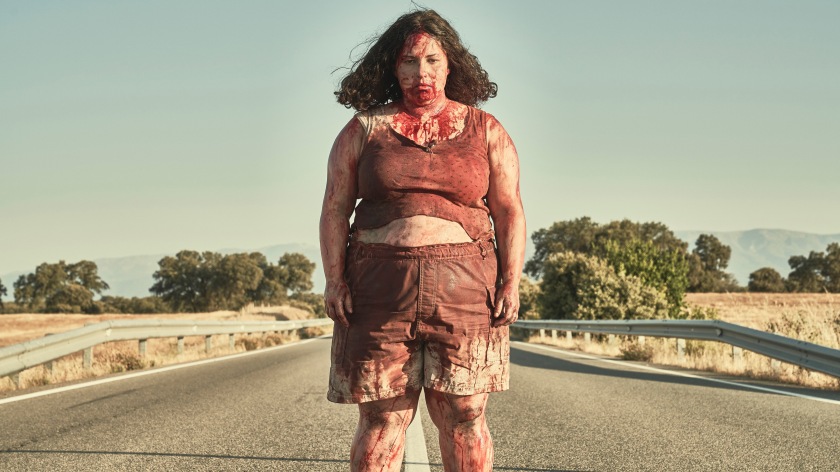 Adolescence at its most brutal is laid out in a both spectacular and understated fashion in “Piggy,” writer – director Carlota Pereda‘s intense, provocative feature film that expands on her 2018 short, “Cerdita.” I am completely in love with everything about this film, from its unlikely heroine to the visual style to the disturbing script.

Sara (Laura Galán), overweight and bullied because of her appearance and social status, works in her family’s butcher shop in a rural Spanish town. She’s been given the nickname “piggy” by the local mean girls, a group of popular teenagers who relish the chance to pick on Sara as frequently and vocally as possible.

Summertime has finally arrived, and Sara is happy to spend the day at the town pool. Today, however, she must face the bullying clique at the one spot that brings her peace. While she’s going for a swim, Sara watches as the girls are brutally kidnapped by a stranger who drives off with them in the back of his van.

When the local cops start asking questions, Sara keeps her mouth shut. She’s intrigued by the kidnapper, seeing his act as one that helped protect her, and Sara eventually develops a romantic crush on the man whom she believes can save her from her miserable, meaningless existence.

It’s a terrific idea for a film, and the story hits home. It’s a morality tale wrapped up in bloody horror, a genre film with something important to say. Galán is terrific as a tormented teenager, and she perfectly expresses the feeling of being an outsider and the overwhelming desire to simply fit in with your peers. It’s understandable (and darkly funny) to watch as Sara plans to run away with the serial killer and kidnapper in a whirlwind romance. She sees him as her savior, and will do anything to protect their forbidden love.

It’s a smart and biting script that has just the right measure of twisted, yet profound, themes. The romance angle is disturbing, with a serial killer Prince Charming sweeping Sara off her feet. It’s a look at the fears, both rational and irrational, that are common within the lead character’s age group. Pereda understands the teenage psyche, and the result is a story that’s insightful and clever, if somewhat depraved.

“Piggy” is a coming-of-age thriller that’s as compelling as it is gruesome, and this tale of revenge, morality, and desire is one that I won’t soon forget.