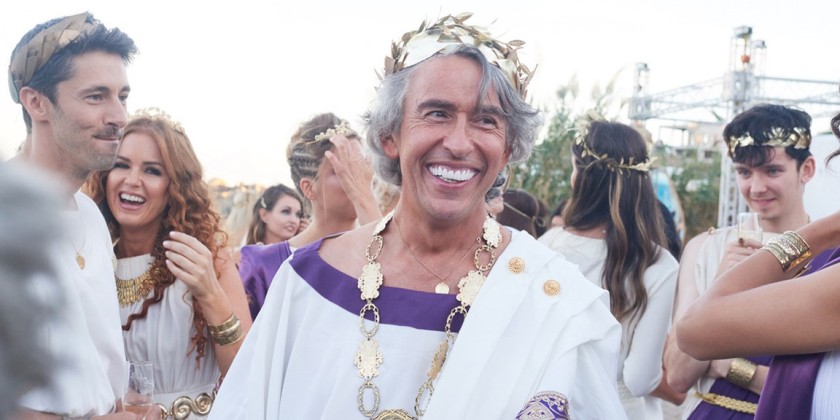 “Greed” is overstuffed with so much social commentary that its bursting at the seams. The film tries to tackle too many hot topics, including the selfishness and sins of the mega-rich, the excesses of the fashion industry, the exploitation of mistreated factory workers, and the plight of impoverished refugees. Its themes may be crowded, but the film is never boring.

The movie tells the fictional story of luxury fashion retail honcho Sir Richard McCreadie (Steve Coogan), an idiot narcissist billionaire who is an excellent villain for modern times. Sir Richard is planning a spectacular themed 60th birthday party on the Greek island of Mykonos, and price is no object when it comes to having proper silverware, a “who’s who” guest list of the hottest celebrities, the finest gourmet cuisines, and a hand-built replica of the Roman Colosseum, complete with a gladiator match featuring a live lion.

There’s a moral outrage that intensifies as this slightly satirical story turns darkly tragic, and the dialogue is crisp and witty as screenwriter (and director) Michael Winterbottom aims his pen squarely at the target of Western capitalism. But despite an extremely satisfying ending and the film’s heart being in the right place, “Greed” isn’t as hard-hitting as it could (or should) be. It feels far too real for that.