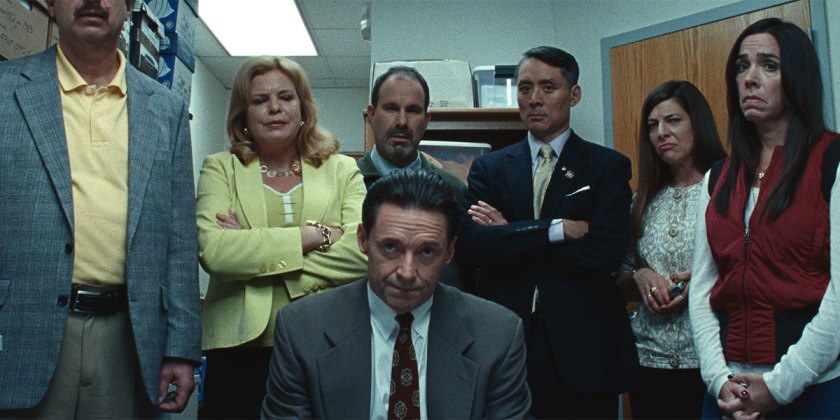 A noteworthy performance from Hugh Jackman and a compelling story about a multi-million dollar embezzlement scheme work in tandem to make “Bad Education” a watchable, if bland, movie. Inspired by true events, the film tells the story of Long Island school superintendent Frank Tassone (Jackman) and Pam Gluckin (Allison Janney), two education professionals who work tirelessly in a bid to capture the nation’s top spot as the best school in America. Frank and Pam care, and they sometimes care a little too much.

When a high school reporter (Geraldine Viswanathan) uncovers some fishy invoice documents while researching a puff piece on the school, she digs deeper and finds evidence of a financial racket of epic proportions. After the grift comes to light, Frank must devise an elaborate cover-up to protect his school district.

The true story isn’t one of those crazy, “I can’t believe this happened” types of tales. It’s astonishing how much money was actually stolen from the school district, and even more so that the guilty parties could buy into their own excuses. There’s so much lying an corruption going on that the liars actually believe their own truths. The guilty parties have truly defective moral characters because they think they can get away with it, with casual excuses as to why the school district was charged $10,000 for a pair of round trip tickets to London on the Concorde. Janney and Jackman are terrific, and both of their performances get better as the crisis unfolds and they grow more and more unhinged.

The script is dialogue-driven, so don’t expect a thrill a minute true crime story. The film has a small-screen feel, and director Cory Finley‘s storytelling is choppy with irritating narrative inconsistencies (especially when it comes to Tassone’s personal life). It’s a head-scratcher when the movie seems to be trying to make viewers feel sorry for the guilty parties.

“Bad Education” is a decent movie with a good story, just don’t ask me to have any sympathy towards these privileged sociopaths.