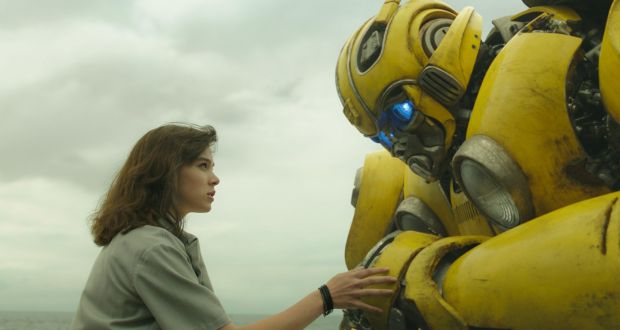 There’s an unexpected sincerity to “Bumblebee,” the latest spinoff movie based on the popular Hasbro Transformers toys. It’s the first of the obnoxious, bloated franchise that’s legitimately a good movie. This crowd-pleaser has a nostalgic vibe and tone that feels like those old 80s movies you’d re-watch as a kid until the VHS tape wore out.

Instead of the Michael Bay-style exaggerated commotion, this is a kinder, gentler narrative of giant, transforming alien robots that turn into vehicles. It’s a story told on a much smaller scale with an emotional angle that never feels forced.

Set in the year 1987, the Autobot Bumblebee is sent to Earth to hide from the evil Decepticons. He finds the perfect cover (after transforming into a worn-out yellow VW Beetle) at a secluded junkyard in a Northern California beach town. When local girl Charlie (Hailee Steinfeld) finds Bumblebee among the scrap heap, she brings him home as an 18th birthday present to herself.

The movie, directed by Travis Knight, has an old school sensibility that feels a lot like the “Transformers” of yore instead of the dumb regurgitation that was “Age of Extinction,” “The Last Knight,” and the rest. There are still the “Transformers” trademark fiery ‘splosions and too many CGI fight scenes, but what’s (thankfully) missing here is the head-spinning, rapid cutting — you can actually see what’s happening on screen. Fans of the original animated series should be particularly delighted in the throwback references.

A huge part of the coming-of-age story emphasizes the value of friendship. Charlie and Bumblebee form a bond that’s irresistible, and even more so when nerdy neighbor Memo (Jorge Lendeborg Jr.) is thrown in to the mix. Much of the credit for this should go to the actors, who all bring their best to the roles. The film takes the Marvel-style formula of hiring lead actors with actual talent and oodles of charisma (John Cena, Pamela Adlon), then proceeds to treat their characters with respect. That’s how you’ll find that you not only care about the relationships between them, but that you also have an emotional connection to a pile of steel.

The straightforward script is a simple and cool blend of nostalgia that works both for today’s kids as well as their 80s-born parents. The movie is overstuffed with references and period Easter eggs (if a bit too much retro pop music), and there are some laughably silly moments near the end, but it doesn’t erase how good the rest of the movie is.

“Bumblebee” is a family-friendly, energetic surprise that injects fresh new life into the abysmal franchise.