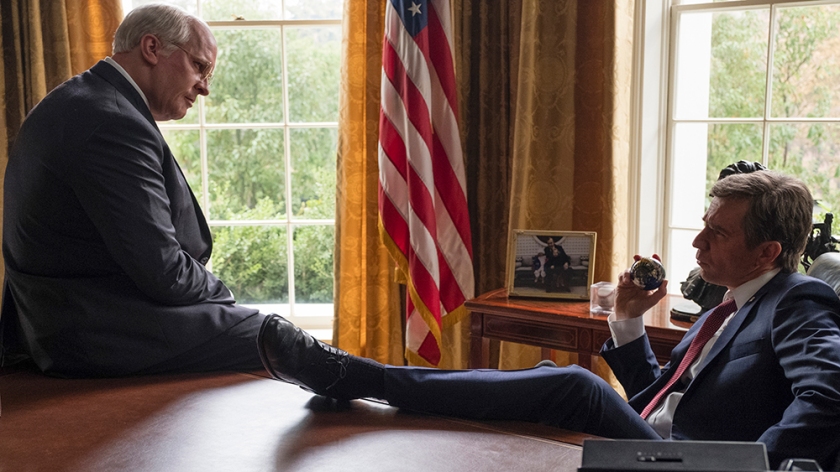 The satirical biopic “Vice,” a film about the rise of Washington insider (and eventual Vice President) Dick Cheney, is director Adam McKay‘s version of big screen target practice that’s aimed squarely at one of the country’s most-hated men. The film explores the (mostly) true story of how Cheney schemed his way through a bureaucratic system filled with limitless corruption and back-slapping, conniving and scheming, that eventually led us to (and created) the mess America has found herself struggling with in present day.

This film has McKay’s his signature style, if you can call it that, written all over it. It’s as if he is attempting a remake of “The Big Short” but with a different subject at the heart of the film. There are plenty of asides, jokey fictional interludes, and multiple instances of characters breaking the fourth wall to directly address the audience. These gimmicks may keep things moving, but they also make the film feel too cutesy for its own good.

The movie’s strong suit comes from the impressive performances and even more impressive makeup. Christian Bale steps into the lead role as Cheney and his mannerisms, speech, and transformation is dead-on. Amy Adams is satisfying as his wife Lynne, but Steve Carell  as Donald Rumsfeld and Sam Rockwell as George W. Bush are the real superstars. Their performances bring a bit of comedy without the camp, each perfectly cast. I wish the ensemble had better material to work with. For two hours, the movie flops around, gasping for air, fueled only by the acting and makeup.

McKay chooses to present a cataloged checklist of facts about Cheney instead of an intimate, though-provoking look about what makes the man tick. Watching this film is more like attending a history class and being asked to memorize facts for a final exam. The messy narrative is steeped in black comedy, but it’s not a very funny one when you consider how these were indeed the formative years that helped create and usher in the era of Trump on a silver platter. All these shadowy dealings behind closed doors on Capitol Hill just made me angry and filled with rage, and the film isn’t satirical or edgy enough to examine the narrative in a fresh or meaningful way.

What a missed opportunity.