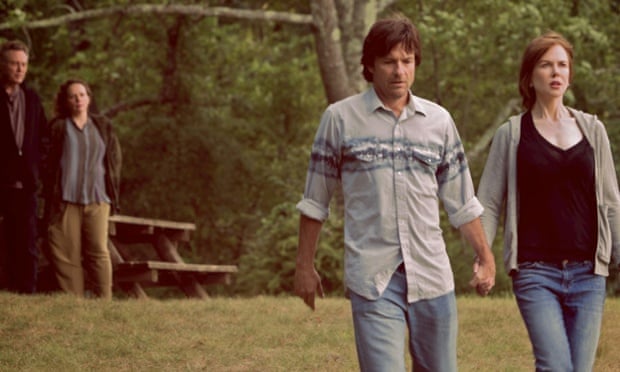 Jason Bateman‘s latest directorial (and acting) effort is the off-putting, draggy “The Family Fang,” a just so/so movie based on the 2011 Kevin Wilson novel. It’s a cool story that unfortunately doesn’t translate well to the screen. The movie looks and feels ugly, and it’s not much more than an exercise in the ‘blah.’

Baxter (Bateman) and his sister Annie (Nicole Kidman) grew up in a very bizarre household, often finding themselves pawns in the elaborate public hoaxes of their performance art parents Camille and Caleb (Kathryn Hahn / Maryann Plunkett and Jason Butler Harner / Christopher Walken). When mom and dad go missing and a car is found covered in blood, the pair reunite to unravel the truth: was it really foul play or is it just another deception?

The major problem with this movie is that it simply can’t decide on what it wants to be and as a result, it comes across as a half-hearted mess. Is it a comedy? A crime thriller? A family drama? There’s just no focus and the film suffers for it. These kids are now messed up adults, but their dysfunction is no laughing matter. Likewise, the humor provides lots of great set-ups that ultimately yield zero payoffs. None of the performances stand out (Hahn, Walken and Bateman are just being themselves, and Kidman is as unpleasantly cold as ever).

This inconsistent movie doesn’t seem to have anything profound nor important to say and as a result, I just didn’t care.