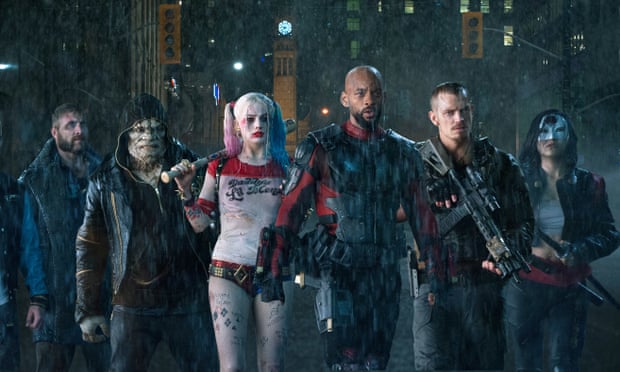 I’m at a loss at what to write about “Suicide Squad.” Here’s one of those weird movies where I know I didn’t like it but I’m not really sure what it is I didn’t like about it. This only happens once in a blue moon, and the amount of disconnect I had with this film is shocking. Everything about this movie falls flat.

This movie could have and should have been so much better! Take director David Ayer, one of the finest working today (and one of the Screen Zealots’ Deities). He has a phenomenal flair for the visual arts, yet his style doesn’t mesh with a superhero movie like this. Either that or his work was ripped apart by the studio, which is what I suspect because there are chunks of the movie that feel like they were made by him and then other parts that feel workshopped to death. You can catch glimpses of Ayer’s vision here and there, but something feels creatively restrained about the whole film.

Making this an even greater failure is that these fantastic DC Comics villains are wasted. These characters are fascinating and are begging to be in a film worthy of their evil deeds. The story just scratches the surface when it could’ve dug far deeper. The satisfying opening vignettes that show the brief origin stories of each character are by far the most compelling aspect of the film, and the entire vehicle needed much, much more of this. The gang is introduced with a bang that quickly fizzles out due to poor writing and paper-thin character development.

While Will Smith (Deadshot) and Margot Robbie (Harley Quinn) hold the film together, I really wanted to see more of Jared Leto‘s deranged Joker and Jay Hernandez‘s emotionally damaged Diablo. The rest of the supporting actors just get lost like debris in a landslide of messiness, but I really, really loved the multicultural cast (it’s great when a big deal isn’t made about having a Latino or African-American or Asian actor).

I think my disconnect comes from the fact that the entire thing feels like two very different movies that have been juxtaposed together. The movie tries to be artsy and moderately succeeds, but it also tries to be action-packed and also partially succeeds. By playing to the art crowd it turns off the blow ’em up action audiences, and vice versa. “Suicide Squad” is caught in a loop that it can’t escape. Everything about this film, from the direction to the soundtrack to the costumes to the acting to the Batman (Ben Affleck) cameo, feels like it’s simply just trying too hard to be liked by everybody.

My one word of advice to the studio heads over at Warner Brothers: slow it down, guys. You’ve already lost the superhero movie race to Marvel, so stop trying so desperately to catch up. Nobody likes nor wants to be around that guy.

David Ayer is one of the best directors working today. In 2012’s “End of Watch,” he crafted a powerful story of the bond between partnered police officers that was a refreshing change about the good women and men in blue who risk their lives to keep us safe. In 2014’s “Fury” (#3 on my list of the best films of 2014) we followed a World War II tank crew that risked everything to defend their fellow soldiers. The best of Ayer’s movies are about the bond between men and women who fight together and would willingly die for one another; it was because of this pedigree that I was fairly excited to see his newest film, “Suicide Squad.”

I generally enjoy comic book films, but I don’t read comic books. My familiarity with the DC universe is limited to what I’ve seen in movies and in Saturday morning cartoons. That is to say that I really only know the heroes and some of the big villains (like the Joker). I’m not sure whether my lack of familiarity was a good or bad thing when it comes to Harley Quinn, Deadshot, Killer Croc and the rest.

“Suicide Squad” feels like a movie with an identity crisis. These are villains. They’re supposed to be bad, right? But none of them really ever do anything bad. The studio, Warner Brothers, seems to have been walking a bit of a tightrope here: not wanting to alienate audiences by showing the members of the titular squad actually doing something villainous, instead we’re subjected to what feels like watered-down versions of these characters. Other than the Joker (who’s barely in it), none of them feel dangerous or edgy. So what we end up getting is a milquetoast band of bandits that are basically low-rent versions of the Avengers.

So when the heroes are bad guys, who are the antagonists? The government, it turns out. Them, and some kind of weird demon-sorcerers with questionable motivations that want to blow up the world, I guess. Having the government be the antagonist is at least interesting, but those demon witch things are just plain dumb.

I really was hoping for a more edgy take. The trailer hinted at a movie that we didn’t get. I was hoping that the studio would go all in and make more of an effort to show the world from the villains’ point of view, a world where Batman is the bad guy and the law of the streets is the only law that matters. Alas, that’s not what we got.

Compared to Ayer’s other recent films, it’s hard to not suspect that this is not the “Suicide Squad” movie he sent out to make. He’s best at telling stories of brothers (and sisters)-in-arms who risk life and limb fighting alongside one another. Those broad themes of loyalty, friendship, honor and duty are present in virtually every one of his other films. We don’t get that here, and it’s a shame. What we do get is a mediocre, middle-of-the-road picture that takes no risks and tries too hard to please too many people. As a result, while it’s not a complete failure it IS completely forgettable.