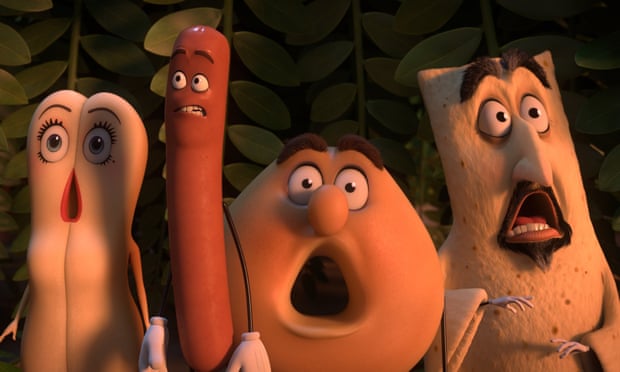 I’m still laughing when thinking about all of the clueless parents who will mistakenly take their children to see the vulgar “Sausage Party,” the new adult-centric animated movie from the alternative comedy writing powerhouse of Seth Rogen and Evan Goldberg (“Superbad,” “This Is The End,” “Pineapple Express“). If blazing up and making movies was an Oscar category, this film would be a shoo-in for an award win.

The movie is outrageous and would complete the perfect raunchy animated triple feature with Trey Parker and Matt Stone’s “South Park: Bigger, Longer and Uncut” and “Team America: World Police.” Parker and Stone are the kings of intelligent social commentary delivered through humor (“Sausage Party” isn’t quite smart enough to ever reach their level), but Rogen and Goldberg aim high in a respectable attempt to join the club.

Friendly hot dog Frank lives in the suburban Shopwell’s supermarket with his wiener buddies Barry (Michael Cera) and Carl (Jonah Hill). Frank lusts after sexy bun Brenda (Kristin Wiig) who shares his store shelf. Every morning the food for sale start their day by singing a glorious hymn to the gods of food, all asking to be chosen by shoppers (referred to as “Gods” by the food) so they can finally pass on to the great beyond and live out their lives in paradise. When Honey Mustard (Danny McBride) gets purchased and returned to the store, he comes back terrified of what he’s seen. As he starts to rant and rave about all of the massive lies they’ve been told, Frank starts to question what, if anything, truly lies in the great beyond.

If all of this sounds like a very atheist-centric message, it is. The film presents an unexpectedly clever critique of organized religion as Frank tries to convince his buddies that there’s no magical afterlife, just certain death. “Sausage Party” tries to be profound and it sort of succeeds; there’s a lot of smart-ish social commentary, political jokes about race, religion, sexuality and more — all wrapped up in a juvenile delivery system of immature, filthy and often crass jokes.

Some viewers will find the film racist and sexist and delicate viewers are sure to be offended more than once, that I can 100% guarantee. But if you’re a fan of these guys and their particular style of comedy, you’ll find nothing particularly offensive, nothing really all that shocking, and plenty of inspired laughs. If you’ve spent a lot of time in supermarkets or if you work in the grocery business (as my dad did), you also have to see this movie.

The film is raunchy and profane but it borders on genius / funny and never shies away from pushing boundaries. The nuts won’t fight alongside the fruits, the German sauerkraut wants to “exterminate the juice,” jive talking Mr. Grits (Craig Robinson) hates the crackers, sexy Teresa Taco (Salma Hayek) is a lesbian who lusts after Brenda Bun, a raucous party goes down every night in the liquor aisle, and there’s an awkward love / hate friendship that blossoms between Sammy Bagel Jr. (Ed Norton) and Kareem Abdul Lavash (David Krumholtz) over their shared neighbor hummus. If any of these premises make you giggle, then you are the target audience for this movie.

Not all of the jokes work and several seem more suited for someone who’s already baked out of their mind on weed (if any film has ever been the brainchild of getting high on cannabis, it’s this). It’s a subversive, perverse style of comedy that appeals to both the lowbrow bathroom slapstick set as well as those with a more sophisticated sense of humor. The sex and drug jokes don’t work across the board; they feel more like a desperate attempt by the filmmakers to be edgy. There’s also far too much unnecessary profanity that detracts from the film’s message.

Obviously nobody knew how to end the story because this movie has one of the most bizarre finales ever. I won’t spoil it because honestly, I’m not even sure how to describe it. Let’s just say it gives a new meaning to (and graphic depiction of) the term ‘food p*rn.’ There’s not one ounce of political correctness in this movie, and I wouldn’t have it any other way.

If you don’t already know, “Sausage Party” is a very, very adult animated comedy created by Seth Rogen and his writing partner, Evan Goldberg. If you’re one of those people who thinks that a movie is perfectly appropriate for your kids just because it’s animated, please adjust your thinking accordingly.

In “Sausage Party”, Frank (Seth Rogen) is a hot dog living in a grocery store with his bun-girlfriend Brenda (Kristen Wiig) with all of the other food. Frank, Brenda, and the other food items are all waiting to be purchased by “the gods” (us) who will take them into “the great beyond” (outside of the store), which the food believes is paradise. But when a food item is returned to the store after witnessing what actually happens when the gods take it home, these illusions are shattered and Frank must find a way to fight back against the gods and save his world.

Big points for creativity here. As you might expect, there are plenty of puns playing with food names. Stereotypes are frequently used for laughs as well as for “why can’t we all just get along” ruminations; there are some really funny and insanely clever bits dealing with Kareem (David Krumholtz) and Sammy (Edward Norton), a lavash and a bagel that live in the same general area of the store but naturally hate one another. Of course there are some dumb bits too, and some that don’t work. And there are plenty of stoner jokes — as you would expect from a Rogen/Goldberg film — but unlike what you see in most stoner comedies, most of these jokes actually work and are pretty funny if you’re not high, too.

“Sausage Party” does not belong on the upper echelon of the all-time greatest comedies, but it has the makings of a cult classic that will be appreciated and re-watched for years to come. And, more importantly, it’s a breath of fresh air in a summer of studio movies that are mostly sequels, reboots, franchises, and other fare that has mostly been yawn-inducing. Hopefully industry suits will take notice of the financial success of risk-taking movies like “Sausage Party” and “Deadpool” this year and in the future will take more chances on original material that doesn’t follow a formula. Yeah, right.