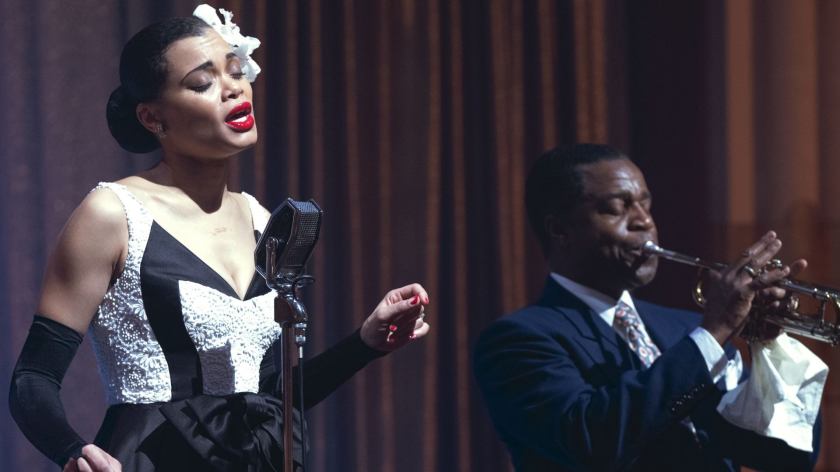 Jazz musician Billie Holiday is a legend; one of the greatest musicians of all time. Most music fans can name their favorite Holiday tune, but none caused more controversy than her song about black lynching, “Strange Fruit.” Screenwriter Suzan-Lori Parks builds her story (based on the novel by Johann Hari) around the song, one that many people claimed had un-American lyrics and provoked people “in the wrong way.”

“The United States vs. Billie Holiday” is a film about racial injustice and censorship surrounding a stirring work of art that gave power to the woman who sang it, as well as the people who heard it. It was a song that ultimately led to events that ruined Holiday’s life.

If you are unfamiliar with “Strange Fruit,” it would be beneficial to give it a listen before watching this film. Most of the story is based on the song, which provides a means for director Lee Daniels to start with a focused, small story and build on his larger narrative. You can’t escape the fact that this is yet another tragic artist movie where a once-in-a-lifetime talent destroys her life with drugs, booze, and poor choices. But what makes this more interesting is that Holiday (Andra Day) actually became an enemy of the United States government because of that one haunting song.

Led by Harry Anslinger (Garrett Hedlund), the Federal Bureau of Narcotics painted a big target on the jazz musician’s back, using her illegal drug addiction as an excuse to barge through the door to complete their real mission: censorship of an African-American artist.

This is an interesting and important story of black America that needs to be unwrapped from our country’s history. It’s fantastic that more stories like this are being told, especially true events that have been long buried in popular culture. Daniels is the perfect choice to handle this biopic, and he adds some nice directorial choices and touches that stay true to his creative vision for the material.

Daniels doesn’t shy away from the less idealized parts of Holiday’s life, including the heroin use and alcohol abuse that tragically ended her life at 44, and her rocky relationship with Federal Agent Jimmy Fletcher (Trevante Rhodes), the man who targeted her with an undercover sting operation. The scenes of drug use and the aftermath of a quick high become so repetitive in the film’s last half, which is a shame because all this rambling amplifies the movie’s imperfections. It’s too long, too.

Jazz fans will love that the film features plenty of Holiday’s classic music, and the period set designs and costumes are astonishing on every level. Day fully steps into the shoes of a tortured artist, and she mimics Holiday’s mannerisms and stage presence very well.

“The United States vs. Billie Holiday” is not an inspirational biopic, but it’s an intimate portrait of brilliant and gifted jazz singer who was tragically brought down by fame, addiction, the ghosts of her past, and the U.S. government.