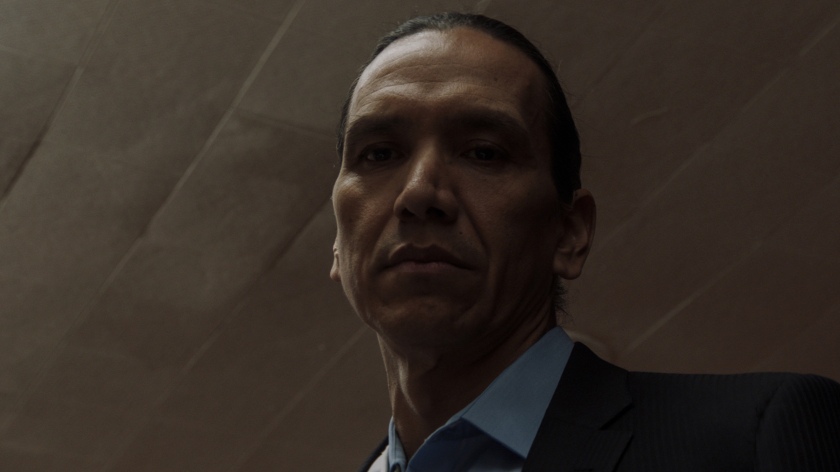 The bleak drama “Wild Indian” is an emotionally complex story of the vicious cycle of trauma and violence, especially as it relates to the Native American community. Writer / director Lyle Mitchell Corbine Jr.‘s film features a predominantly Indigenous cast, which gives the film a very specific (yet also universal) feel. It’s a story rich with cultural heritage, and one that doesn’t shy away from weighty themes of enduring hardships and breaking free from inter-generational trauma.

Makwa (Phoenix Wilson) and his best friend Teddo (Julian Gopal) are normal school aged boys. They love to hang out and play in the woods, and they’re inseparable. Makwa has been showing up to class covered in bruises, which are starting to get worse. He says he got them from falling down, but everyone knows he’s being abused at home. One day, the two boys go out in the woods to do a little shooting when out of the blue, Makwa murders a schoolmate in cold blood. Willing to help keep his friend out of trouble, Teddo agrees to help hide the body and keep the secret forever.

The film skips forward in time and portrays the two men as adults who are living very different lives. Teddo has just been released from prison and after living with the guilt of what he’d done years earlier, decides to pay a visit to Makwa (Michael Greyeyes), who is now a successful businessman with a wife and child of his own. It’s a confrontation that’s years in the making, and it’s time for each of them to face the truth of what happened in the woods.

Corbine Jr. draws terrific performances from his cast, and the film is bathed in a sense of dread. The story doesn’t shy away from the unforgivable horrors that haunt these two men, including two absolutely terrifying scenes featuring Makwa (one where he acts out a violent fantasy with a stripper and another that features him interacting with his son). There’s something so cruel at the root of this man, and it’s something he may never be able to escape.

“Wild Indian” raises some interesting ideas about grief, guilt, and responsibility, all while shedding light on the ongoing struggles of Indigenous people in America.