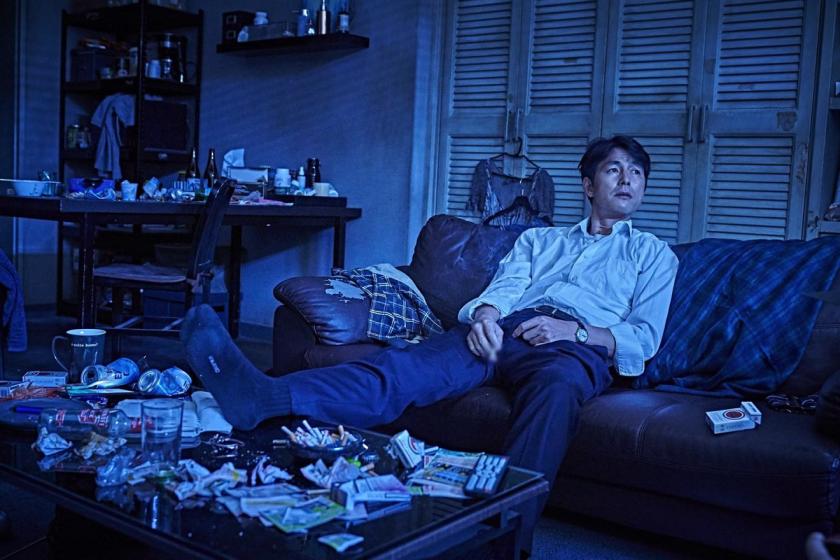 The South Korean crime thriller “Beasts Clawing at Straws,” directed by Yong-hoon Kim, serves up a delicious blend of noir and black comedy. Based on the Japanese novel by Sone Keisuke, the film is an intense tale of murder, deception, and a duffle bag full of cash.

Told in chapters, the film takes a handful of normal (and interesting) characters and thrusts them into the crime underworld. There’s janitor Jung-man (Sung-Woo Bae) who works long hours at a sauna to make enough money to care for his ailing mother. Tae-young (Jung Woo-sung) is a customs officer who owes a significant debt to the criminal known as Mr. Park. Escort Mi Ran (Hyun Been Shin), who suffers at the hands of her abusive husband, sees a way out of her situation after a client from China offers to murder him so they can split the insurance policy money.

A few minor characters are thrown in the mix, all of them eventually crossing paths by way of a designer bag stuffed with money that Jung-man discovers at his workplace. He hides it away, hoping the owner will never return to claim it.

The film is separated into six sections that introduce new characters, most of whom are forced by circumstance to participate in a crime. It keeps them likeable, and the set-ups are presented in a way that not only plays like a puzzle, but makes the bag the center of attention. It’s the most important object in the movie, and we never learn who it actually belongs to until very late in the story. The pieces fall into place with an unpredictable turn of events, with lots of good twists, turns, and a wickedly dark sense of humor.

“Beasts Clawing at Straws” is a highly entertaining crime thriller that gives an invigorating jolt to the genre.