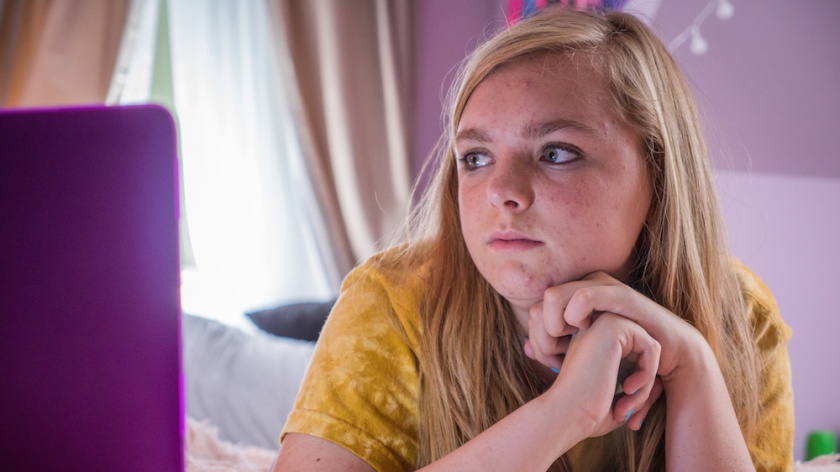 Just because “Eighth Grade” is a lauded indie doesn’t mean it’s a great film. Writer / Director Bo Burnham‘s intimate ode to early teenage angst at times feels like a documentary rather than a fictional narrative, making it just as awkward and relatable as its lead character.

Thirteen-year-old Kayla (Elsie Fisher) endures her last week of middle school as she waves goodbye to the past and gets set to start high school in the fall. The film paints an authentic picture of what it’s like to be a preteen, a time in life where you’re trapped for a few tortuous years between the joy of childhood and the reality of being an adult. It’s a sensitive and thoughtful story, but it’s told from the wisdom of an adult perspective. I tried to go back to my early teen years to think about this movie and while it is appealing and sweet-natured at first glance, the thirteen year old me would never have been so astute nor self-assured. It’s easy for an adult to portray kids in a semi-authentic light while inserting their own life lessons into the past. Kyra feels and behaves like a real kid, until she doesn’t.

And that’s where the film’s problems arise: it creates a mostly phony picture of adolescence. Kayla is super shy and reserved, the quiet type who has few friends. Despite this character trait, she somehow manages to make YouTube videos with platitude titles like “Being Yourself” and “How to Be Confident.” She’s also a budding feminist by the end of the story, another element that rings false. Her loving, divorced dad (Josh Hamilton) is as stereotypical as they come, and their relationship isn’t explored as much as it could be. Then again, there are some great authentic scenes here, from Kayla’s elation to being invited to hang out with high school seniors at the mall to an awkward first date over a plate of cold McNuggets.

But for all of the realistic highs and lows, there are stagy, unbelievable stories of empowerment and thoughtfulness. One great example is an event that strikes fear in every 13 year old girl with just two simple words: “pool party.” It’s relatable to watch Kayla take a deep breath and walk into the crowd bathed in her hunched posture of insecurity. In a later scene, after calling her dad and begging him to come pick her up, she boldly jumps up to sing karaoke in front of the same kids at the party. Nothing about that rings true. Kayla may be finding her footing and newfound confidence, but this is one of many scenes that feel phony.

In the end, “Eighth Grade” is an endearing and nuanced coming-of-age dramedy with an insightful yet never exploitative look at the struggles all young girls face in life. Overlook its flaws and you’ll be transported back to your very own stinging early teen years.