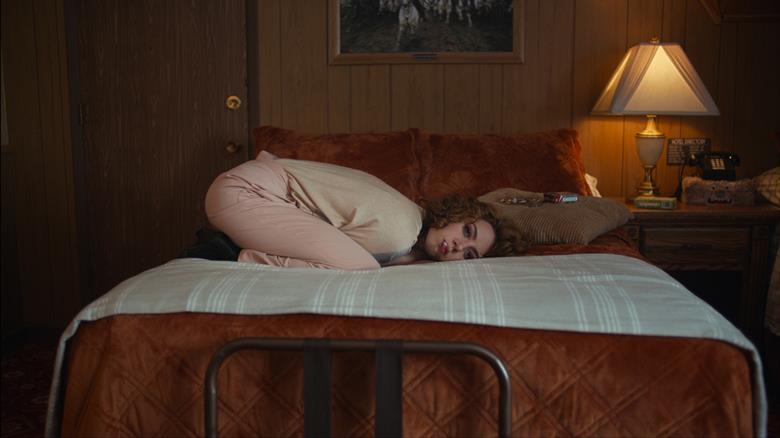 The midnight movie circuit got a whole lot more interesting in 2016 when director Jim Hosking brought his John Waters meets Jared Hess style of schlock to the big screen with “The Greasy Strangler,” one of the strangest movies I have ever seen. This time he’s back with “An Evening With Beverly Luff Lin” and in addition to his cast of no-name non-actors, Hosking has managed to score some serious comedic talent. The film certainly has most of the oddball elements that made “The Greasy Strangler” so memorable, but it could benefit from a whole lot more “greasy.” Here he tries his hand at sincerity and a meaningful plot, and it just doesn’t work as well as his silly and depraved first feature.

When Lulu (Aubrey Plaza) is laid off from her waitressing job by her own husband Shane Danger (Emile Hirsch), she realizes just how unhappy her marriage really is. While resting on the couch one day, she sees a commercial featuring a mysterious man from her past (Craig Robinson) who’s coming to town to perform at a local hotel. Meanwhile, her husband robs a local market owned by her brother Adjay (Sam Dissanayake), who in turn hires a thug named Colin (Jemaine Clement) to pay the Dangers a visit and retrieve the money. Frustrated and longing to rekindle the relationship from her past, Lulu runs off with Colin and forces him at gunpoint to take her to the hotel to see the show.

Hirsch, fully committed to the director’s vision, is absolutely hilarious. He steals every scene he’s in. To fit in with Hosking’s world he gives an awful performance on purpose, hunched over with exaggerated physical movements and shouting his lines in uproarious bouts of overacting. Clement and Plaza are sincere and quite funny, but most of the material doesn’t support their characters or their comedic talents. And poor Craig Robinson, who’s stuck growling and grunting like a modern day Frankenstein instead of speaking for the majority of his screen time.

Most of the film is set at this hotel with random characters wandering in and out. Hosking likes to cast unusual looking non-actors in supporting roles (fans of his earlier film will delight in seeing much of the cast returning here), and this sometimes works and sometimes backfires. For every absurd random coughing fit or reference to “Mr. Von Dong Schlonger” that makes you laugh, there’s some gonzo line about car keys or poop that does not. Still, Hosking’s comedic timing is on point — he seems to know just how long a gag can go on before its funny quotient expires, and he stretches them to the limit.

The visual and physical humor is when the film is at its funniest, especially when it’s accompanied by the deadpan, monotone line delivery. Most of this film feels weird for the sake of being weird, and there’s hardly anything freaky or special enough to make it memorable. It’s way too long and becomes a huge letdown although it starts off so promising. I love Hosking’s distinct style and tone, but it just doesn’t quite come together this time around.

Simply put, this director doesn’t care what you think and will make whatever kind of film he wants that stays true to his unique and fully realized vision. Whether you enjoy or are exasperated by his films, at least that’s the sign of a true artist.