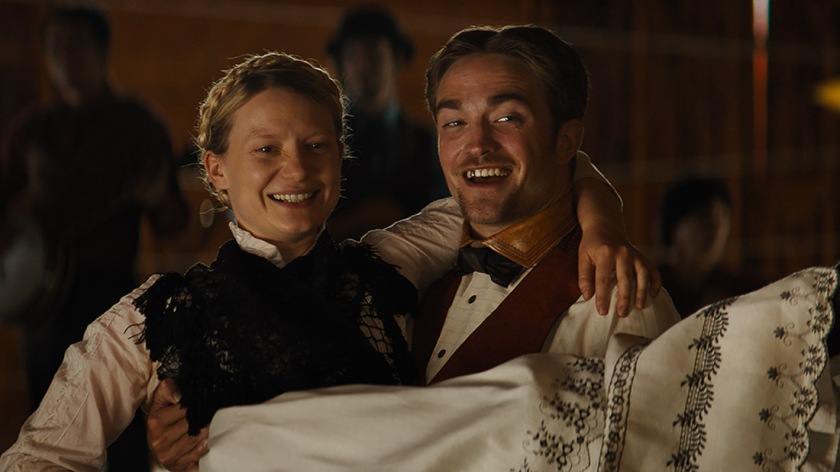 I’ve been a fan of David and Nathan Zellner (often referred to simply as the Zellner Brothers) from way back when they were just starting out and making shorts, which makes it doubly difficult to say that “Damsel” is by far their weakest work. The kooky western starts strong but rapidly runs out of compelling material and feels way too long. It’s one of the biggest disappointments at the Sundance Film Festival this year.

Robert Pattinson, quickly blasting through the ranks and rising to the top as one of the industry’s most talented actors, shows just how versatile he can be. His character Samuel is comedic gold, a man uncomfortable in his own skin. He’s a sweet natured, romantically inclined ordinary guy who attempts to achieve great things by planning a secret rescue of (and foolhardy marriage proposal to) his kidnapped sweetie, Penelope (Mia Wasikowska). A hero he’s not, Samuel coerces drunk preacher Parson Henry (David Zellner) to aid him on his quest, first by rescuing the titular damsel and then quickly performing a binding ceremony.

There’s no clear conclusion or direction or even point to the story, with a script (co-penned by the Zellners) that gives the impression that the men wrote down any and all ideas without any editing or consideration for relevancy and included every little thing in the film, hoping that something would stick. The result, especially in the film’s last hour, is a cluttered mess of shifting tones and inconsequential characters (like a random Native American chief (Joseph Billingiere) and Nathan Zellner‘s ill-advised Rufus Cornell).

Thankfully the Zellners’ trademark style of off-kilter dry wit and absurdist, goofy, oddball humor makes an early appearance to keep the story moving along. Their uncanny ability to balance humor with serious and meaningful drama also means there’s a twist to this story too. It’s such a shame that nothing about the film’s second half clicks.

There’s still quite a bit to like about the movie, from the sweeping shots of Utah and a talented eye for visual beauty and detail (the duo is great at showing and not telling, requiring that viewers to pay close attention to every little element or risk missing a pretty hilarious joke). The two best things about the whole project are the twangy, banjo-heavy original score by The Octopus Project and Pattinson’s performance.

There are many animal actors onscreen too, from cats to chickens to pigs to the adorable miniature horse, Butterscotch (Daisy). This also leads to one of the most upsetting aspects of the film: there are several scenes where the horses were visibly frightened and startled by sound effects on set, which immediately took me out of the story. I’m sure “no animals were harmed” during filming, but this left a really bad taste in my mouth.

This isn’t a bad movie and it’s certainly not unwatchable, but it’s a definite stumble for the usually fantastic Zellners.