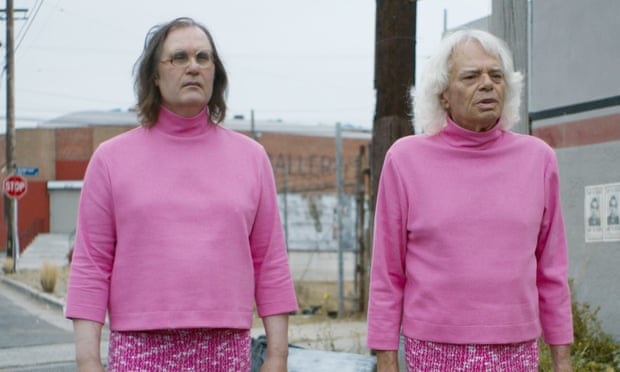 Some things just can’t be forgotten. Some things just can’t be unseen. Once you’ve watched “The Greasy Strangler,” it will continue to haunt your dreams. This film sets a new bar for deviant, depraved, shocking, bizarro cinema. If there’s ever been a film that I could definitively say is “not for everyone,” this is it. No, really folks: please heed my warnings.

Still reading this review, sicko? If so, this film should be right up your alley. In what I can only describe as an exceptionally filthy mash-up of Jared Hess meets John Waters, “The Greasy Strangler” tells the story of Big Ronnie (Michael St. Michaels) and his adult son Brayden (Sky Elobar). The duo lead a ridiculously awful disco walking tour for pathetic tourists in Los Angeles (one tour stop includes a doorway where “Kool from Kool and the Gang” once stood). When the men host the plump and pretty Janet (Elizabeth De Razzo) on one of their tours, the two begin to fight for her affections — and the murderous Greasy Strangler alter-ego is unleashed.

This homage to great B-movies explores the mother of all daddy issues in the most reprehensible and repellent ways possible. There’s plenty to make even those with the most sturdy of sensibilities wince (think “Pink Flamingos,” “Mondo Trasho,” and “Multiple Maniacs” taken to the extreme). The film is unrated and filled with oddball nudity (fake penises are showcased for a quite hysterical comedic effect), explicit sex, bloody violence, and strange cussing. Oh, and there’s plenty of vomit-inducing grease eating too.

The movie starts off strong and is genuinely quirky and downright hilarious. There’s the deadpan dialogue delivery from the actors, who are purposely giving really, really bad readings (that’s the very core idea behind camp, and this film does it correctly in every way possible). The costumes are simple but played for laughs (matching pink vintage sweaters, tight underwear punctuated with bulging beer bellies, and a revealing disco suit for Big Ronnie that will have you in stitches). The original score is straightforward, uncomplicated and repetitive, but it’s the ideal match for the content (and it’s been stuck in my head for days). The absurdist humor works too: the repetition goes from funny to annoying and back to funny again in both the dialogue and offbeat situations.

Director and co-writer Jim Hosking has created a blazingly original work of art with memorable (dare I say even lovable) characters. How unfortunate it is that the film eventually devolves into a crude, shocking affair with lots of gross-out situations presented simply for the joy of shock schlock. This movie is both great but also awful, a contradiction in its own right.

Much like the characters in the film, my mind was blown by this nearly indescribable movie. You’ve never seen anything like this, guaranteed. “The Greasy Strangler” is instantly quotable (“Hootie! Tootie! Disco! Cutie!“), abnormally gross, completely filthy, unconditionally weird, and impossible to forget. I could see this becoming a true cult classic, and it should have very long legs on the midnight film circuit for years to come.

Make no mistake, “The Greasy Strangler” is gonzo. This type of movie generally appeals to a very small group of people because it’s very, very strange and well outside of most people’s cinematic comfort zone. For those who don’t mind wild, bizarre, and insane films, this will be a welcome relief from mindless, by-the-numbers, big-budget fare.

Big Ronnie (Michael St. Michaels) and Big Brayden (Sky Elobar) are father and son who live together and run the family business — a tour of Los Angeles locations that were supposedly important in the disco craze of the 1970s. Whether Big Ronnie is telling the truth about his escapades with the likes of Michael Jackson, Kool and the Gang, and Earth, Wind and Fire is beside the point; both of them but Big Ronnie in particular are, as the two of them like to say, bulls*** artists. Big Ronnie, in particular, is uniquely talented at getting under the skin of his customers, often ending tours in shouting matches where it becomes clear that his patrons have been added to the top of Big Ronnie’s hit list. When a serial killer named “The Greasy Strangler” begins to kill off Big Ronnie’s customers, Big Brayden quickly turns his suspicion to his father — who has an inexplicable love of grease.

To tell you anything more would be to ruin this movie for you. It has to be seen to believed. “The Greasy Strangler” is best described as “Troll 2” as directed by a young John Waters. Perhaps it’s because a trailer for the revival of “Multiple Maniacs” screened before this movie, but the comparison to Waters is unmistakable. This is bizarro, stomach-churning, cringe-worthy cinema at its best. Other than the very odd and inexplicable ending to the film — which I still don’t fully understand — it’s also a well-constructed film that feels like the fully-realized fever dream of director Jim Hosking and his co-writer, Toby Harvard.

“The Greasy Strangler” is crazy, but it’s also pretty damned funny. There are some things that I saw and heard in the movie that I’m not likely to forget anytime soon.