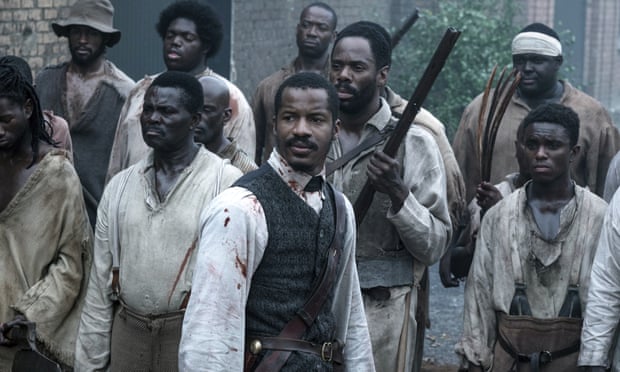 No matter what you think of writer / actor / director Nate Parker and his shady personal life, it becomes clear early on in his film “The Birth of a Nation” that he must have one massive ego. Parker’s arrogant, smug direction and pretentious dialogue practically leaps off the screen and smacks you in the face. This isn’t a bad film; in fact, the first half is highly compelling and quite well done. Just brace yourself for the checklist of slavery film (and Oscar bait) cliches that are to follow.

I can’t fault the performances of Parker as real-life historical figure Nat Turner, a slave and preacher who leads an uprising against white plantation owners in the South, nor his co-stars Armie Hammer, Colman Domingo, Penelope Ann Miller, Aja Naomi King, and Tony Espinosa. All are quietly impressive — for the most part. The story is interesting and is one that needs to be told. Too bad this film presents a less than stellar delivery vehicle.

The film jumps the shark at its halfway point, starting with a ridiculous, unintentionally funny Bible quote-off between Nat and a white slave owner. It’s not meant to be funny but I’m sorry to say that I couldn’t help laughing (thankfully I was the only person in my empty theater). The self-important and pompous vibe in this scene was over-the-top awful. How I longed for something more effective and understated.

Add to that the requisite blood-soaked whipping scene that occurs soon after. Without a doubt the scene is awful and upsetting to watch, but of course at the end Nat’s spirit can’t be broken as he slowly, defiantly stands (with a rousing, swelling musical score as the backdrop) to face his abuser. We’ve seen it all before and here it just comes across as showy and self-important, which sorely lessens the impact.

The film continues to quickly derail in the most spectacular fashion, culminating with a “Django Unchained” style of a bloody, violent slave uprising and racial revenge murder in the name of religion (it will soon become obvious that material such as this is best left to the skilled hands of a director like Quentin Tarantino).

I am aware that I bring a certain mindset to films like this, and I’m not really sure if this film was intended as a condemnation or celebration of religion. There’s an odd dichotomy at play throughout. When a man’s wife is raped for the pleasure of a white man, the slave turns to Nat and asks “where is your God now?” In another scene, Bible verses commanding slaves to submit to their abusive masters (1 Peter 2:18) take center stage, while later on contrasting verses are read that preach an uprising against injustice as “God’s will.” In the typical devout fashion, the characters and filmmaker pick and choose at will which verses from the religious text to use to make their case. This is maddening to someone who is a freethinker and I wish the intention of the filmmaker was made clear. It’s a scripture-filled R-rated film, which in itself is a confusing contradiction.

The rousing, single-tear sermons get a little heavy-handed and that not one character questions Nat being willed by God to unleash a savage, brutal coup against folks of a different color is more than a little disturbing. Of course, the white slave owners hang many African-Americans as a retaliatory response (this is filmed in a very moving fashion and is one of the most memorable scenes from the entire film). What angers me most about this movie is the blatant, heavy-handed, attempted manipulation of the audience. I did not fall for it and neither should you.

“The Birth of a Nation” isn’t a bad movie. In fact, the first half is quite effective and rather good. It’s when the film reaches its halfway point that it begins to fall apart. I feel that because of the film’s subject matter, people are afraid to admit that this isn’t Best Picture material. It’s an interesting portrait of a very important historical figure, but a provocative subject doesn’t always make for a great movie.

At the 2016 Sundance Film Festival this January, the film causing the biggest splash was Director Nate Parker‘s “The Birth of a Nation.” We missed seeing the movie at Sundance but we couldn’t miss hearing about it; the buzz reached a dull roar when Fox Searchlight bought the film for a record-setting amount of money. Based on the talk of the industry, the movie was set to be a virtual lock during awards season.

Amazing how the tides of industry and public opinion can turn. After the news of a 17 year-old rape case involving Parker came to the forefront over the summer, “The Birth of a Nation” quickly lost its position as the odds-on favorite for the Academy Awards, and ended up getting released without much fanfare or notice. Hollywood quickly turned against Parker and his movie.

What’s interesting about this story is that “The Birth of a Nation”, more than anything in recent memory, has exposed what’s wrong with awards in the film industry: they’ve become so highly politicized that very little attention is given to the only question that should matter at all: is the movie any good? Decisions about whether a film is deserving or not deserving of awards should not be made before anyone even has the chance to see it. I admit that I don’t necessarily want to see a bad person collect a golden statute (and to be clear, I’m not making any judgments about Parker), but if s/he made a great movie, why should it matter? The answer to that question is simple: film awards are based on politics, and not on their relative merit as works of art.

I say all of this because no film in recent memory has exposed this truth as starkly as “The Birth of a Nation”. But no one in the general public has paid much attention to this behind-the-scenes drama. People do, and will, continue to believe that the Oscars actually mean something and that “Best Picture” actually means that the film receiving the award is somehow qualitatively better than every other movie that was released in that year while ignoring the simple truth that judging works of art will always be subjective.

It’s impossible to be a Hollywood observer and not know the saga of “The Birth of a Nation.” In spite of the furor surrounding the film and Parker, I did my best to ignore the politics and judge the movie on its own merit — which is precisely what any movie deserves.

As a piece of entertainment, “The Birth of a Nation” is strictly middle-of-the-road. The story is certainly an interesting one: the story of Nat Turner (played by Parker), a preacher that was a slave to Samuel Turner (Armie Hammer). Turner made history when he incited revolution among his fellow captives in Virginia.

“The Birth of a Nation” is a decently-made movie with a script that’s executed well, even though it directly rips off a slew of other Oscar-winning movies. I realize there’s a fine line between a homage and a rip-off, but this movie clearly crossed that line: it’s as though Parker carefully studied every other Best Picture winner from the past 30 years and tried to incorporate as many elements of them that he could. It’s been a while since a picture has been so blatantly obvious in its attempt to bait members of the Academy.

But being Oscar bait alone doesn’t make “Birth” a bad movie — it’s not. It could have been better, however. A real opportunity was missed to transform the picture from a historical drama about a particularly shameful time in American history into something that provides real insight into the human condition.

Specifically, while “Birth” did a good enough job in telling Turner’s story, that’s as far as it went. What it missed exploring was how Turner managed to resolve for himself the inherent inconsistencies in the scripture he preached.  How did a man that once used the Bible to encourage his fellow slaves to obey even the cruelest of masters continue to rely on that same book to later justify revolution? How does one make peace with accepting only certain portions of the Bible, but not others, when the book so clearly endorses the barbaric institution of slavery?

I realize these are difficult questions to grapple with. The contradictions continue to confront us even now, and perhaps there is no easy way to resolve them. But I think a real opportunity was missed in this movie when the inconsistencies are so readily apparent. If “Birth” had attempted to confront these difficult questions — or at least show us how Turner dealt with them and resolved them — the movie could have achieved greatness. But, disappointingly, it never quite gets there.