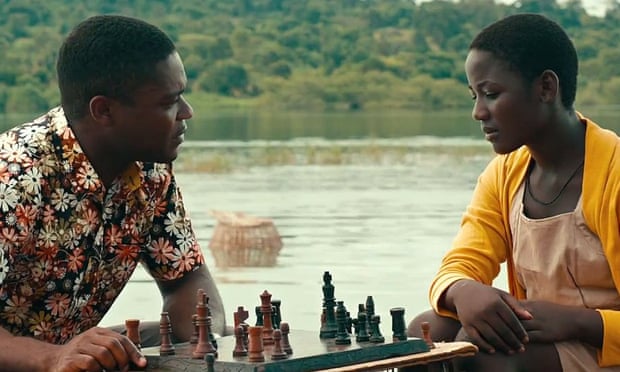 “Queen of Katwe” is a feel good movie about chess. Yes, chess. Boring, boring chess. The film tells tells the true story of Phiona Mutesi (a delightful Madina Nalwanga), an impoverished young girl from Uganda who learns to play chess and goes on to become an international chess champion. There’s much to like and respect here, mostly in relation to the story and the real kids who have chosen to better themselves through education (Phiona learns to read when she is 13 years old). In the end, she successfully escapes a life of poverty and is able to take care of her mother and family. Who doesn’t enjoy a tale of someone overcoming adversity?

This film offers a fantastic portrayal of feminism and girl power, and places great importance on the value of education. This is a terrific movie for families, and I’m hopeful that it will inspire many youngsters who think they have limited opportunities (and also those who are already fortunate).

The kid actors are delightful across the board, and Lupita Nyong’o adds plenty of gravitas as Phiona’s overprotective, tough mother Nakku Harriett. David Oyelowo doesn’t cover any new ground with his wooden, insipid performance as youth counselor Robert Katende. Be sure to stick around for the film’s closing credits; the actors are pictured next to their real-life counterparts with a brief description of what they’re up to now.

This is a good story but not a good movie. The film’s painfully unhurried pacing hurts it greatly. It’s overly long and quite boring in stretches. Worst of all it’s trite, loaded with clichés, features a bit too much religious imagery, and is stuffed with commonplace platitudes. But I guess that’s what we all should expect from an inspirational sports movie from Disney.