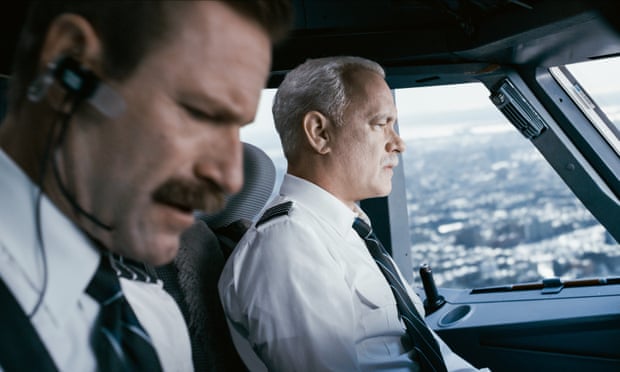 I can’t speak to how accurate it might be as a depiction of an actual historical event and its aftermath, but as a movie “Sully” is pretty entertaining.

You already know what the movie is about: US Airways Flight 1548, nicknamed the “Miracle on the Hudson”. This film examines the aftermath of the water landing by Captain Chesley Sullenberger (Tom Hanks) and First Officer Jeffrey Skiles (Aaron Eckhart), which supposes that the National Transportation Safety Board (NTSB) was on a bit of a witch-hunt against Sully and Skiles. In the days after the landing, the NTSB supposedly sought to find Sully and Skiles to have acted recklessly and irresponsibly, hypothesizing (with the help of computer models) that Flight 1548 could have made the runway at LaGuardia instead of ending up in the Hudson River.

“Sully” essentially is a courtroom drama, interspersed with Sully’s flashbacks and dream/nightmare sequences, as well as a couple of different reenactments of the moments leading up to and after the water landing. And as a (nontraditional) courtroom drama, it works well. Sully is a compelling character and Hanks plays him perfectly: although he is highly experienced and was able to use that experience to act decisively when it was needed, Sully is a human who, like all of us, has doubts. What if he did make the wrong decision? What if he could have made it back to LaGuardia? Could he lose his career and his livelihood if he was wrong? These self-doubts are familiar to all of us, and it was those aspects of the film that helped me understand and connect with Sully.

“Sully” works because of Hanks and because of the assured direction of Clint Eastwood, who handles the material well and has a good sense of pacing. While it’s a little difficult to watch the movie without bringing your own preconceptions — including the information that the witch-hunt-like nature of the NTSB’s investigation was highly exaggerated — the film does a good job of staging and dramatizing material that may have otherwise been fairly dry. I was entertained.

One small postscript: “Sully” is definitely not a movie for fearful flyers. Although the story of Flight 1548 has a happy ending, there are a number of nightmare sequences that would terrify those who are afraid of flying. If you’re one of those folks, stay away!