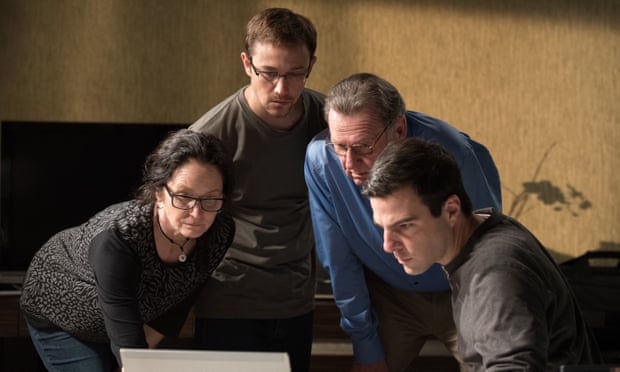 Oh, Oliver Stone. You’ve never once strayed from your signature bloated directing style. “Snowden” was pretty much what I expected: an overly long, boring, visually pompous, clumsily constructed, yet well acted retelling of the story of the whistleblowing government employee who, after leaking classified documents regarding a secret NSA mass surveillance program, is accused of espionage. Most folks know Edward Snowden‘s story so I won’t go into that here, and you’d think it would be compelling enough to make a truly kick-ass fictional film. The 2014 Oscar winning documentary “Citizenfour,” which tackles the same exact subject, is the better movie. And that’s not saying much.

Everything about this biopic feels tired, dated and safe. Although it’s stuffed to the brim with too much information, the film still manages to be told in a simplistic way that makes it accessible to most audiences. This film doesn’t even come close to sailing over anyone’s head, but you also won’t learn anything new. The attempts at orchestrating moments of thrilling dramatic tension fail miserably (we all know Snowden makes it out with a flash drive full of information, so stop pretending that he might get caught), and the whole thing feels stale.

Too bad Stone chose to play it safe with this compelling material. Snowden is viewed as an irresponsible traitor to some and a civil liberties hero to others, and it would’ve been a more interesting experience had this discord been explored instead of the one-sided portrayal Stone presents. There’s a good dramatic retelling of the documentary and its director Laura Poitras (Leo), but it all seems a little more than pointless — why not just watch the doc instead?

You all know at least part of the story of Edward Snowden, the man who turned over to news agencies massive amounts of data demonstrating the extent to which the United States government and its agencies (particularly the Central Intelligence Agency and National Security Agency) spy on both its own citizens and those of the world. Regardless of your political leanings or personal views, Snowden’s story is one worth telling. And it’s been told twice now, once in documentary form (“Citzenfour“) and now with this narrative version of his life.

In this version, Joseph Gordon-Levitt plays Snowden. Melissa Leo is Laura Poitras, director of “Citizenfour” who herself has become part of the story through her interaction with Snowden during the days leading up to and following the leak. Zachary Quinto is Glenn Greenwald and Tom Wilkinson is Ewen MacAskill, reporters for The Guardian who originally broke the story. They work together well: Gordon-Levitt has Snowden’s tics, mannerisms and vocal style down pat, Nicolas Cage is perfectly cast as Snowden’s slightly off-balance CIA instructor, and Shailene Woodley turns in another convincing performance as Snowden’s girlfriend Lindsay Mills.

As a director, Oliver Stone has been a bit uneven throughout his career. He hasn’t had a movie that’s made much of an impact for more than a decade — and for good reason: his directorial approach has (at times) been more style than substance — even though that style hasn’t always been that great in the first place. But he is clearly in his comfort zone with this material, a story of a would-be patriot that has the courage to speak out in a country he loves but a government that he doesn’t. It’s presented well, interspersing the story of Snowden’s early career with scenes of his days in the Hong Kong hotel with Poitras, Greenwald and MacAskill as the story broke. By switching between recent and older history, the story moves better and more quickly than the documentary (which was highly acclaimed but, in my view, was slow and a little bit boring). As compared to that other film, “Snowden” is much better as a piece of entertainment. Still, however, it’s largely forgettable.

Other than rather pedestrian direction, the key problem with the movie is that it looks at its lead character with glasses that are so obviously rose-colored. Instead of giving us depth of character, the Snowden we get is idealized; a righteous, patriotic, highly intelligent man who has single-minded focus on what is right and wrong, at all times. Look, I don’t expect a movie by Oliver Stone to be an evenhanded character study, but by refusing to show his protagonist as a flawed human being Stone does his picture a disservice. Even if you agree that Snowden did the right thing by releasing the data, it’s hard to trust this film as reliable source material because it comes across so heavy-handed and partisan. For that reason, a film that so clearly wants to sway public opinion will probably fail to change many minds.