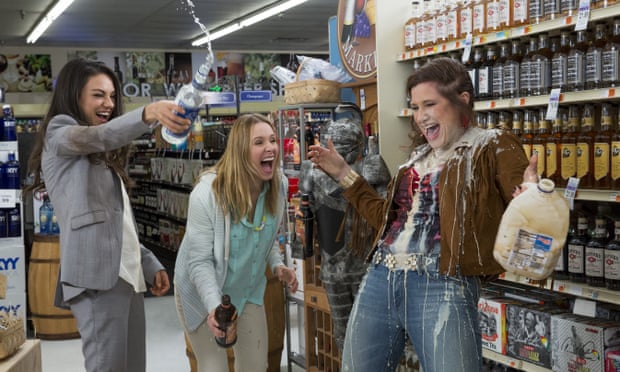 First things first: don’t call this “The Hangover” for women. Yes, there are some similarities to the Bradley Cooper trilogy, but it should be noted that this movie is specifically for mommies and not for women in general (and no, I do not have children). This fantasy story is pandering exclusively to the child-baring crowd, so much so that there’s nary a missed opportunity to take a dig at women without kids (the worst being the suggestion that we should all pity the frumpy, mousy lady without a family who attends PTA meetings simply because she’s lonely).

Note to parents: to those of us who are blissfully childless, mom-centric movies like “Bad Moms” come across as pathetically sad rather than knee-slapping funny. We don’t have constant familial obligations, our friends don’t act like the ones portrayed onscreen, and while we do work hard, at least we aren’t stressed about missing soccer practice or packing gluten-free lunches. I have much respect for my friends with kids, but this movie isn’t even the least bit relatable to me.

The story is as simple as they come and the film’s title says it all: good moms decide to go on strike and become bad moms. Overworked and stressed Amy (Mila Kunis) is tired of trying so hard to be perfect, so she forms her own pack of fed up moms. Kiki (Kristen Bell) is a homemaker with four little ones and an overbearing, bossy husband; Carla (Kathryn Hahn) is a carefree single mom with a lunkhead son. Kiki never lets loose and Carla makes a habit of day drinking and flirting with the dads in the carpool lane. Sick and tired of the judgmental attitudes of PTA queen Gwendolyn (Christina Applegate) and her hypercritical minions Stacy (Jada Pinkett Smith) and Vicky (Annie Mumolo), the trio of unlikely friends decides to take them on in a no holds barred race for — wait for it — PTA president.

I find it hard to believe that there would be a clique of mean girls among moms, but I have zero real life experience regarding this so the humor was completely lost on me. In fact, these moms seemed more whiny than sympathetic. If they wanted more free time, they shouldn’t have chosen to have kids in the first place.

Throughout this boneheaded fest of female caricatures, the gals create their own Moms Gone Wild scenarios. Too bad the movie barely lives up to its R rating; the filmmakers could’ve taken this way farther into female-driven raunch territory (a’la “Bridesmaids“) but instead choose to play it safe. This desperate comedy features scenes of cheap chardonnay chugging, house parties, destroying a local supermarket, taking Jell-O shots with Martha Stewart, and a really pathetic subplot that focuses on Amy’s cheating husband and the “hot widower” of her dreams.

At least the hot widower (Jay Hernandez) has a bit of depth: all the other men in the film are written as lazy morons, childlike dolts, or borderline emotionally abusive asshats. (Public Service Announcement, ladies: if you are married to a man who acts like this, get a divorce now because you deserve better). Please tell me people don’t actually live like this.

While this movie isn’t as awful as you’d expect, it’s not that good either. It was able to elicit a few chuckles from me, mostly due to the comically dependable Hahn. Hahn’s trademark snarky, sarcastic delivery sold her lines in many of her scenes. If not for her, the majority of the pitiful excuses for jokes would’ve fallen flat.

“Bad Moms” plays like an uninspired Hallmark movie but with lots of unfunny sex related wisecracks. This isn’t an outrageous roast of modern motherhood, it’s a master class in pandering.

Want to see a 2016 movie with a positive, empowering feminist message and real girl power? Check out “Whiskey Tango Foxtrot,” “How to Be Single,” and “Ghostbusters.”

I don’t have kids. That eliminates me from the intended audience for “Bad Moms”, a mostly unfunny R-rated movie that panders heavily in its race to the comedic bottom. That said, the film is enjoying broad and sustained success at the box office and continues to attract lots of people who apparently find the movie hilarious. Certainly that was true in my audience, which was full of mostly 30-something mommy types that laughed loudly and long throughout.

The story is simple enough: Amy (Mila Kunis) is a hard-working mom who tries hard to be the “perfect” parent. She is constantly on the move, shuttling her kids back and forth to school and sport events, spending time at the office, attending PTA meetings, doing the shopping, and the like. We get it: being a mom is hard work. One day, Amy decides she has enough and makes a pact with fellow mothers Carla (Kathryn Hahn) and Kiki (Kristen Bell) that instead of trying so hard to be a great mom, she’s going to be a bad one.

This decision leads to the film’s funniest dialogue, all of which is driven by the talented Hahn as the barely-involved mom who long ago mentally checked out of the parenting business. The best lines are all hers, and her delivery recalls her amazingly funny cameo in “The Goods: Live Hard, Sell Hard.” As a lead, Kunis (who I otherwise like very much) is a bit too one-note to carry a movie, and the always-enjoyable Bell is not given enough to do to balance that out. As Gwendolyn, the leader of a crew of bitchy judgmental moms, Christina Applegate is okay but is also sadly limited in what she’s given to do.

The by-the-numbers script lacks imagination. The male characters are all one-dimensional (the men are either emotionally stunted, irresponsible and uninvolved; controlling bullies; or sex objects, with no in-between). Most of the jokes are lazy and there’s plenty of reference humor with very little attention to character development. While “Bad Moms” is certainly not a bad movie, if you’re not in the target audience, there isn’t much you’ll like here.