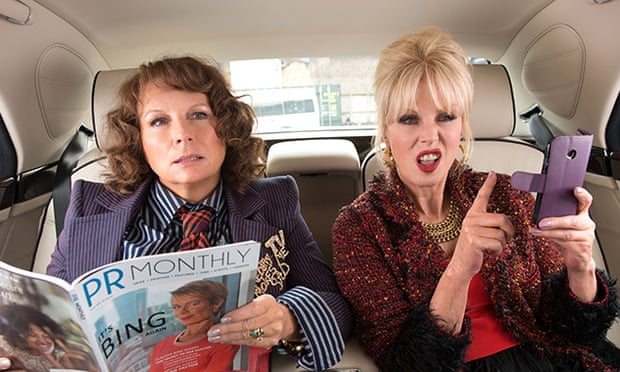 “Absolutely Fabulous” is the gayest movie I’ve ever seen, darling, and I mean that in the most complimentary of ways. This film adaptation of the cult 1990s BBC sitcom translates well to the big screen, mostly due to the larger than life main fashionista characters of Patsy (Joanna Lumley) and Edina (Jennifer Saunders).

I’m only vaguely familiar with the television series and had zero background going in, but I instantly found myself rooting for these borderline detestable women. While a knowledge of the source material would probably enhance your experience, I can attest that it’s completely unnecessary to enjoy this film. Yes, there are a few obvious in-jokes that I didn’t get, but the rest of the movie is so silly and goofy that I enjoyed it immensely anyway. Even better if you are familiar with the fashion world.

There’s not so much of a plot as a series of wacky adventures, but it works. Edina and Patsy are two middle aged, heavy drinking best buddies who live their lives in a desperate attempt to stay young, hip and relevant. They wear outlandish designer clothes, start their morning routines with a couple of shots of Botox, and engage in all types of insane self destructive behavior (from promiscuity to workplace coke sniffing to high end champagne guzzling). At the heart of this movie is a tale of undying friendship, with the pair supporting each other no matter what.

The quips come fast and furious; I laughed out loud (and often) at the rapid fire one-liners. The jokes are truly inspired across the board and the laughs are earned, not lazy. This isn’t your everyday type of humor; it’s rather specific but you probably know who you are if you find snarky wisecracks hilarious. (Note that the movie is very tame for an R-rating too; there’s not much raunch in its humor).

The film is packed with humorous celebrity cameos from the fashion world but unlike the dreadful ones in “Zoolander 2,” these are very funny and really serve to enhance the movie. I won’t spoil them all, but Rebel Wilson nearly split my sides with her sass-talking flight attendant shtick.

This movie is a stylish yet odd bag but I’m guessing if you were a fan of the series, you’ll especially dig this movie. I’ve never once watched an episode and I thought it was a quite witty and a ton of fun. It made me want to watch the source material, and that is a win in itself.

“Absolutely Fabulous” plays like an extended in-joke that will only be appreciated by fans of the show or people who really, really know the fashion industry. As someone who fits neither category, I found it to be mildly amusing and occasionally entertaining, but that’s about it.

Edina (Jennifer Saunders) and Patsy (Joanna Lumley) are struggling to find their places in a new world of Twitter, fleeting fame, and fickle clients. After hearing that supermodel Kate Moss is looking for new PR representation, experienced but somewhat client-challenged Edina attends a party to meet up with Moss and pitch her. But instead of winning Moss over, Edina accidentally pushes her into the Thames and Moss disappears and is feared dead. Edina, her would-be murderer, first goes in hiding and then on the run, looking to solve the mystery of the missing Moss.

The movie is full of characters that were probably on the television series. It also features a  number of cameos from people who are probably famous fashion designers. I know who Stella McCartney is, but thankfully they told me when she was onscreen because otherwise I wouldn’t have known her by sight. As I learned through watching the credits there were lots of other folks from the fashion world that weren’t identified in dialogue and as a result, I missed them entirely. Not that I feel like that is any great tragedy, mind you, but it is a bit of a challenge to watch a film that is so filled with references, cameos, in-jokes and Easter eggs and not get 95% of them.

So I’m left to evaluate the movie purely on its own, without much of a frame of reference. And on its own, it’s just… okay. There are some decent laughs early on, but they peter out quickly. The women have a good chemistry but I didn’t find either one of them particularly likeable. Maybe that’s the point. I don’t know.

Bottom line: unless you’re a superfan of the AbFab television show or of high fashion, you should skip it.