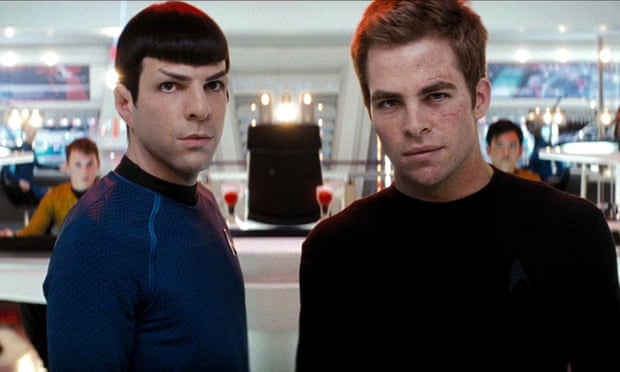 One of the best elements of the new “Star Trek” reboot films is that you always feel the characters are in real danger. This sense of peril keeps the engine humming for a while in “Star Trek Beyond” but before long, the film runs out of gas. Early in the movie there’s a spectacular attack on the USS Enterprise which sets up expectations that this was going to deliver a kick-ass ride. Too bad it’s all downhill from there.

With an ancient artifact on board the Enterprise, a surprise attack from lizard skinned Krall (Idris Elba) forces the crew to crash on a mysterious planet. Captain Kirk (Chris Pine), Spock (Zachary Quinto), Bones (the scene stealing Karl Urban), Uhura (Zoe Saldana) and the rest have to battle their way through the aliens to escape the hostile planet. Herein lies the real problem with the movie: the storyline is mediocre and there are far too many fistfights.

Most disappointing is the lack of character development and interactions that made the 2009’s “Star Trek” and 2013’s “Into Darkness” rise above this film. Instead of snappy dialogue and meaningful scenes between the characters, we get frantically paced, jumpy, pitiful excuses for action scenes and miscellaneous dizzying 360 aerial shots. The editing is so frenzied that I couldn’t tell what was going on half the time so I quickly lost interest. Fast cuts do not make up for a lacking script (written by Simon Pegg and Doug Jung).

Director Justin Lin (who has helmed several films in the mega successful “Fast and Furious” series) has a knack for similar material, but it’s obvious that J.J. Abrams is much better at handling such big films. I’m on board with a new director for the franchise, but the film feels different in a bad way and suffers.

The special effects are respectable but a little too cartoonish at times, with a heavy reliance on CGI. Everything feels loud and expensive, but unfortunately other elements suffer. There’s far too much emphasis on explosions and hand-to-hand combat and not enough of the magic that lies in the character development (as seen in the previous reboot films). The actors don’t have much interaction unless it’s punching or shooting or grooving along to a classic Beastie Boys track that blasts through the theater at full volume (this extended music video scene felt out of place). The costumes and makeup in particular seem slapped together too; Spock’s wig is actually crooked in the final shots of the movie!

Summer movies are supposed to be fun, and I didn’t have fun watching this movie. It simply didn’t feel cinematic enough for me (and I saw it in IMAX)! That’s a red flag when a big budget film feels more like a television episode than a grandiose blockbuster. I do think that part of the problem is that the first two films in the reboot series were just so good that this third installment pales in comparison. The writing and direction is not as polished as the first two, and there’s just nothing that special nor memorable in this disappointing film.

Jim, Spock, Bones, Uhura, Scotty, Sulu and Chekov are back for a welcome visit in “Star Trek Beyond.”

The plot doesn’t make a lot of sense. Some bad guys with really advanced technology lure the Enterprise to their really remote planet in order to enslave the crew and destroy a Federation Star Base. How did the alien technology get so far ahead of the Federation’s, such that the invading ships are able to easily cut through the Enterprise’s force field? With such technological advances, why did the bad guys need the Enterprise to attack the Federation? Why have they been waiting on a remote planet for all of these years, just biding their time until they have a chance to attack? Why is the artifact at the center of the plot so essential to the alien weapon, and why is it even necessary, given the obvious starship-defeating technology they already have?

These are questions that apparently will remain unanswered. But that’s okay. The movie isn’t really about the plot; it’s about the crew of the Enterprise and their chemistry. Happily, that chemistry remains firmly intact.

I love seeing this crew working together. All of them — Chris Pine (Kirk), Zachary Quinto (Spock), Zoe Saldana (Uhura), Karl Urban (McCoy), John Cho (Sulu), and Simon Pegg (Scotty) — do a great job working together. Seeing them play off of one another in the very well-established “Star Trek” way is welcome enough, regardless of the silly excuse for a plot. And seeing Anton Yelchin in one of his last roles brings a bittersweet note to the film; he’s so damned likeable as Chekov and it’s hard not to be frustrated and sad at the talent we all lost in a stupid accident.

Plot-wise, “Star Trek Beyond” is only marginally better than the disappointing “Star Trek Into Darkness.” But seeing these characters (and actors) back together again in another iteration is such a pleasure that I can overlook the film’s flaws.