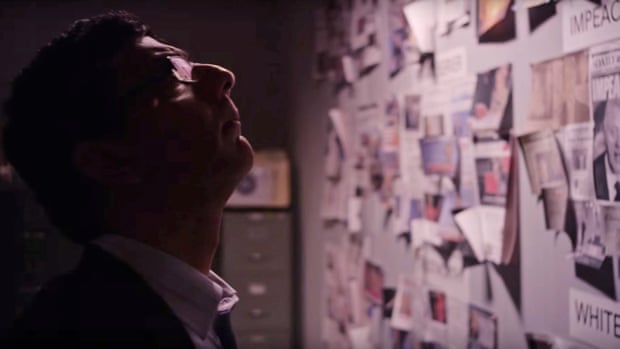 As an intelligent, highly educated female, I know I’m not the target audience for “Hillary’s America: The Secret History of the Democratic Party,” the latest right-wing drivel from everyone’s least liked pseudo-documentarian, Dinesh D’Souza. D’Souza, the director behind such cinematic gems as “2016: Obama’s America” and “America: Imagine the World Without Her” (ranked in the #1 spot on my list of the Worst Movies of 2014), is back to expose his unparalleled ignorance on the big screen. This time it’s directed towards the Democratic party and Hillary Clinton.

No matter your political leanings, this simply isn’t a very well made film. Historical scenes are poorly reenacted and other dramatic scenes are laughably staged (with D’Souza himself in a starring role). Worst of all is that this illogical, xenophobic rallying cry is disguised as a truth-seeking documentary. It’s a focused diatribe that’s also a very poorly constructed (albeit slick looking) piece of political propaganda. The movie plays like two stories in one: part one features loads of revisionist history, all trying to explore the ‘secret history’ (read: racist leanings) of the Democratic party; part two is a concentrated attack on Hillary Clinton that centers around a list of ridiculous Fox News conspiracy theories.

Early on, D’Souza states that the object of his film is to ‘prove’ that villainous Democrats have a ‘plan to steal America,’ whatever the hell that means. The movie lacks any truly convincing evidence and the facts that are presented make little sense; the film appears to revel in its own ignorance. There’s no linear presentation of the arguments nor the formula: it’s not even X + Y = Z, it simply jumps to X = Z. Anybody with half a brain will see right through this deception.

There’s a very, very heavy-handed agenda on display here. I won’t go into all of the claims that the film makes, but some of the more loathsome accusations are that Planned Parenthood was created solely as a means to abort black babies and that Hillary Clinton encouraged husband Bill to have affairs simply so she could control him. But wait, there’s more! According to this film, the Democratic party was responsible for slavery, starting the Ku Klux Klan and murdering Abraham Lincoln. D’Souza even goes so far as to call the Clintons “depraved criminals.”

The film closes with a rah-rah rallying cry to get out and vote for Donald Trump for president. There’s a big, rousing patriotic musical number with a cute little girl singing “The Star Spangled Banner” with a huge orchestra, followed by a lovely rendition of “God Bless America” while pictures of American flags and kids and soldiers flash by. This heavy-handed pandering may be shrewd but it’s also overkill, serving as an obvious distraction for the uneducated.

This is not a movie for anyone with any critical thinking skills or those with an in-depth knowledge of American history (trust me, it will make your head spin). “Hillary’s America” is just preaching to the choir of easily distracted red state Republicans. Is anybody really empty-headed enough to believe some of these claims? I guess so, because my packed audience responded with a standing ovation.

I fear for the future of our country.