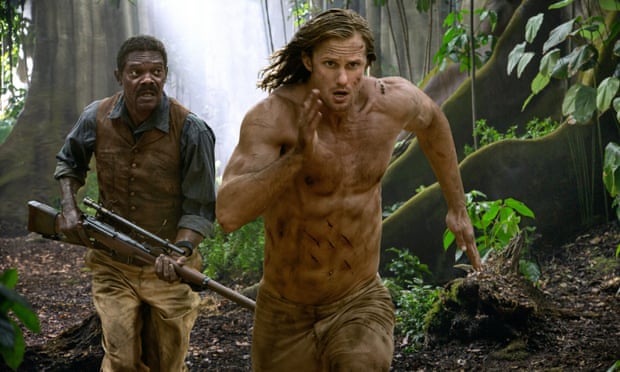 Not much happens in “The Legend of Tarzan,” but it’s still pretty fun to watch hunky Alexander Skarsgård swing from the trees with his brethren of CGI apes. You’ll get mild enjoyment from this movie if you are a fan of the classic character of Tarzan.

Skarsgård, looking like nothing more than a plastic Ken doll, is perfectly cast in the role. He delivers his lines with a look of bewilderment and confusion, making it easy to believe he was raised in the jungle. In another splendid casting decision, Margot Robbie plays his Jane. She’s feisty, strong, smart, and easily the best character in the film.

Christoph Waltz is his usual one-note self, again playing another villain. I love the man but I’m sick of his repetitive performances; he’s the same in every single movie. The weird casting decision to put Tarantino alums Waltz and Samuel L. Jackson together was distracting: I kept wanting Jackson to step up and make this movie awesome by yelling about how he was sick and tired of all those “motherf’n apes in this motherf’n jungle!”

I really don’t have much to say about this movie, and that’s a first. The animated animals look real but this unremarkable movie is an exercise in the bland. There’s not enough action, not enough spectacle, and not enough plot. It’s just okay. Not really bad, not really good, but just okay. Meh.

“The Legend of Tarzan” is the latest attempt to revive the classic character in a feature-length movie. To be sure, Warner Brothers is eyeing the Tarzan story for its potential to launch a new franchise. The jury’s out as to whether that will happen.

As the titular character, Alexander Skarsgård does a fine job playing a man torn between two worlds. Margot Robbie infuses the Jane character with a modern spirit that works well; this Jane is no weeping damsel in distress. Thankfully, neither Skarsgård nor Robbie have to carry the movie alone, as I’m not sure that either of their characters is compelling enough to do that. They share screen time with Tarantino alums Samuel L. Jackson and Christoph Waltz — each of whom are compelling enough to drive the plot.

To be sure, Waltz chews the scenery as Leon Rom. That’s what Waltz does best, and it works well for this film. It is Jackson, however, that steals the show. Jackson plays George Washington Wallace, a U.S. ambassador who urges Tarzan to return to his birth home in the Congo to prevent the country’s native people from being enslaved. It is Wallace’s motivation, backstory, and skill that form the true backbone of “The Legend of Tarzan”, and it is he who is most able to hold the attention of modern audiences.

Which is the real issue with “The Legend of Tarzan”: the Tarzan character itself feels just a little too antiquated to be interesting enough to drive a franchise. When compared to the modern superhero and action movie franchises that own the summer, Tarzan is a creaky throwback. When can watch super soldiers, Norse gods, wealthy crime-fighting vigilantes, and Amazons with godlike powers, I’m not sure that Tarzan can hope to compete. Faced with a choice at the box office, I think moviegoers will almost always opt for those other choices. This movie is a good illustration of why: it’s just interesting enough to hold attention, but is not memorable and will not be something that will ever compel re-watching.