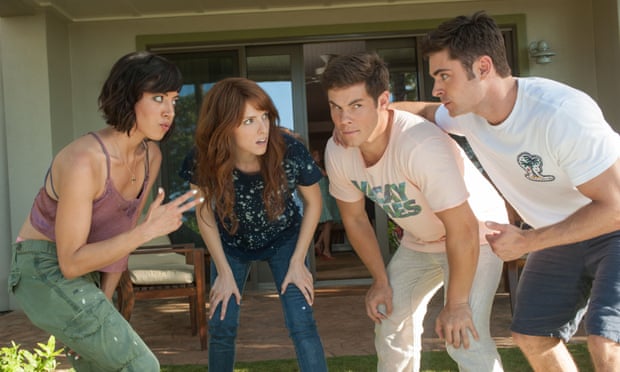 The mildly amusing “Mike and Dave Need Wedding Dates” isn’t quite the laugh a minute riot that the previews promised, but there’s still enough funny material to keep things interesting. It’s the perfect recipe when it comes to casting, a flawless pairing of immensely likeable young and funny actors.

When lifelong screwups (and brothers) Mike (Adam Devine) and Dave (Zac Efron) ruin yet another family gathering with their ‘riled up’ antics, their mom and dad (Stephanie Faracy and Stephen Root) request that the duo find a pair of ‘nice girls’ to invite to their sister’s (Sugar Lyn Beard) wedding. Of course these nice girls eventually turn out to be unemployed potheads Alice (Anna Kendrick) and Tatiana (Aubrey Plaza). This is a really hilarious idea for a movie. Too bad the premise isn’t full realized.

I’d rate the funny percentage at about 40%. Most jokes rated nothing more than light chuckles from me but there were a couple of scenes that left me in extended laughter. Otherwise, everything else fell flat. Humor is subjective, of course, but I also didn’t hear anyone else in my audience laughing either.

The movie feels too much like a cheap and lazy “Wedding Crashers” rip-off than an outrageously original comedy. This isn’t a bad movie and it’s not completely unfunny. It’s enjoyable enough, but it could’ve been so much more.

Like so many other big R-rated summer comedies before it (with the notable exceptions of 2015’s “Vacation” and 2013’s “We’re the Millers“), “Mike and Dave Need Wedding Dates” starts out fairly strong and then gradually tapers down until it fizzles out.

The idea of the movie is lots of fun: Mike (Adam Devine) and Dave (Zac Efron) are two twenty-something directionless losers who are the life of every party. But, as their parents note, Mike and Dave always take things one step too far, and those parties always end up ruined. Their sister Jeanie (Sugar Lyn Beard) implores them to bring “nice girls” as dates to her wedding in Hawaii, which Jeanie hopes will calm the boys down. Alice (Anna Kendrick) and Tatiana (Aubrey Plaza) – who are very much like Mike and Dave – pretend to be those “nice girls” to get that free trip to Hawaii.

Early on, as we are establishing the characters, the laughs come easily and frequently. Things start to drop off significantly when the group arrives in Hawaii, and the guys gradually start to realize that Tatiana and Alice aren’t quite who they say they are. As the movie reaches its climax, the situations become a little more far-fetched, and it becomes hard to continue caring about what happens next.

This is a movie with a good premise but without heart or a sense of direction. Earlier in life, Adam Sandler and his Happy Madison studio made a career of making movies about loveable losers, ne’er-do-wells that were forced by circumstances to grow up in one way or another. In many of those films (“Billy Madison”, “Happy Gilmore”, “Joe Dirt”, “The Wedding Singer”), we find something to love about the main characters, and we actually care about what happens to them. Those movies endure because they have heart. Movies like “Mike and Dave” will be forgotten in a year because it has none.