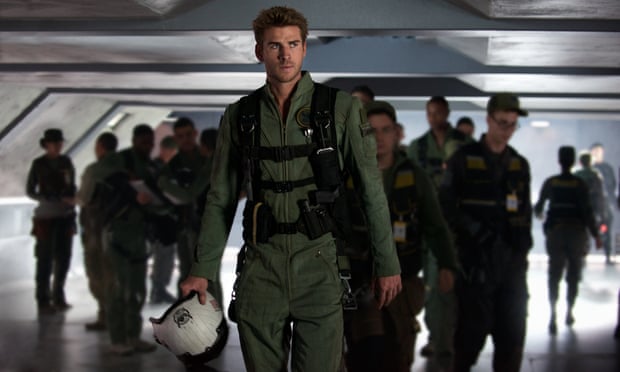 If there is any justice in the movie world, the incoherent “Independence Day: Resurgence” will die a quick, swift death at the box office. This movie so lousy that it doesn’t deserve to be viewed by anyone.

I’d like to tell you the plot of this disaster, but I honestly have no idea what it is. There are some cool looking aliens, decent enough special effects, and a talking (yes, talking) giant alien metal sphere. Is this some sort of elaborate studio joke? The film is packed with cacophonous mayhem, with quick cuts and probably no more than two pages of dialogue. It’s little more than a rapid-fire parade of good looking, racially diverse millennials flying fake animated sci-fi jets and delivering such pithy gems as “Get ready for a close encounter, bitch.”

All of the magic and intensity from the original film is gone. The sequel is set in present day but the world, thanks to all of that alien technology, looks like something out of the distant future. It’s confusing and weird on all levels. Hollywood had 20 years to get it right and they failed.

Sure, director Roland Emmerich throws us old timers a bone and shoves original “Independence Day” alums Jeff Goldblum (David), Bill Pullman (Whitmore), Judd Hirsch (Juius), Brent Spiner (Dr. Okun), and Vivica A. Fox (Jasmine) into pointless supporting roles, but their appearance will only cause you to long for a better movie. The only sentimentality I had was thinking how Will Smith had the good sense to opt out of this garbage.

The ‘updated’ cast is, how can I put it lightly, better suited for daytime television. Some of the new actors play the grown up kids of the original characters (Jessie T. Usher as Dylan Hiller and Maika Monroe as Patricia Whitmore). All of them, including new additions Liam Hemsworth (Jake) and Angelababy (Rain) have zero chemistry as they stumble over their clunky characters. How the filmmakers were able to woo the talented Charlotte Gainsbourg into a bit part will forever be a mystery.

Popcorn movies are supposed to be fun, but this one was trying on every level imaginable. I left the theater emotionally exhausted. Every ridiculous cliché is here: stranded kids on a school bus, a baby in danger at a hospital, and of course a cute dog that faces peril. I actually laughed out loud at every one of those moments in the movie. Silly can be fun (see “London Has Fallen“) but here, instead of going the campy route, it’s played straight and it fails miserably. There’s no emotional heft to the story or the characters and as a result, I had zero emotional response to any of them; I didn’t care if they lived or died.

Worst of all, the film’s ending actually sets it up for a sequel! Vote with your wallets, folks, and tell Hollywood that we don’t want another crapfest like this. I simply cannot stress how god-awful this film is. Yes, it’s even worse than “Mother’s Day.” You have all been warned.

It pains me greatly to say this: “Independence Day: Resurgence” is not just bad. It’s beyond bad. It’s absolutely terrible.

Why does it pain me so? Because the original “Independence Day” is still one of my all-time favorite movies. Even now, 20 years later, the movie holds up and is still just as fun to watch as it was in 1996. Yes, it’s silly and some plot points are even ridiculous, but it’s still a good movie in the best tradition of big, loud, boisterous blockbusters.

I don’t know how to put this delicately, so I’ll just say it: “Resurgence” effectively sh*ts on all of the goodwill you have towards its predecessor. Some of the characters you loved in the first one are back, but they exhibit absolutely none of the traits you loved about them. In their place, we have doppelgängers whose only function is to make you recall your fondness for them in the first film. They are strictly ornamental; they adorn the screen but do very little else. This grows tiresome, very quickly. With the benefit of hindsight, I can tell you that Will Smith was wise to stay away, far away, from this steaming pile.

To the extent there ever was or could have been an “Independence Day” franchise, “Resurgence” sucks the life out of it with some of the worst writing I’ve ever seen in a big studio tentpole. This script feels like it was written by an untalented and unfunny improvisational troupe who has seen lots of science fiction movies, responding to shouted suggestions from the audience. That is to say that very little thought went into actually writing this thing. The characters have no depth, and don’t seem to even inhabit the same space. Entire plotlines exist solely for the purpose of exploiting your fondness for the original. I would say more, but truthfully I mentally checked out about halfway in and stopped paying much attention to what was banging around and exploding on the screen. I would have walked out had it not been for my desire to see whether it ever would get any better. I’m disappointed to say it didn’t.

Avoid this one like the plague. Go watch the original again and just pretend this movie doesn’t even exist. Trust me, you’ll be better off for it.