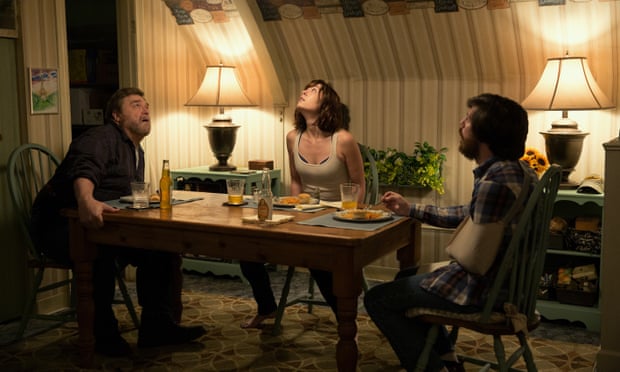 First things first: I promise to avoid giving away key plot points and surprises, so continue reading with confidence as this is a guaranteed spoiler-free zone. It’s best to avoid most online message boards and reviews so folks won’t ruin the film for you because the element of surprise is nearly all that “10 Cloverfield Lane” has going for it.

This film suffers from a severe identity crisis. It’s two distinct movies in one, each with a sort of uncomplimentary storyline. The first narrative is really strong, engrossing and (for the most part) entertaining; the second narrative is so bad that it nearly ruined the entire movie. This movie was pretty great until the final 20 minutes. It’s a shame because the majority of the film was effectively menacing, but the over-the-top, ridiculous finale just didn’t work for me.

John Goodman hams it up as Howard, a big, booming, mentally unstable survivalist who both imprisons and saves wounded traveler Michelle (Mary Elizabeth Winstead, once again proving herself to be one of today’s most underrated actresses) and good ol’ boy next door Emmett (John Gallagher Jr.) from the danger that’s “out there.” Howard never divulges too many details about the attack but he guesses aloud that it could be the work of the Russians — or aliens. Thankfully he has been prepping for this day for years and has outfitted a mighty fine underground doomsday fallout shelter.

The best parts of the film happen in the claustrophobic bunker and the uncertainty of what to believe is effective and engaging (is menacing Howard a hero or a psycho)? The characters begin piecing together unsettling clues and decide to take a chance above ground and begin to plot their escape. Eventually all of this just goes on for way too long and the movie becomes a bunch of boring filler. As Howard grew more and more irate and agitated, I began to have a lot of those “gee, what would I do in this situation” moments throughout. I enjoy when a movie makes me see myself in the same predicament as its characters and has me weighing their same options (and clues). Is it better to stay underground with a nut or is it better to try to escape outside to something that may be far worse?

The film starts out strong and will keep you guessing the motives of slightly deranged Howard, but it ultimately ends with a stupid, unsatisfying, shaky-cam conclusion. I can best describe it as a mash-up of “Misery” and “Signs.” The movie is not as unsettling nor tense as the trailer leads you to believe: I’ve seen much better, much more suspenseful movies than this. There are a few cheap jump scares but I was never on the edge of my seat. “10 Cloverfield Lane” is predominantly a cinematic stunt rather than a cohesive work of art.

It’s really difficult to review this movie without giving anything away, but I’ll give it my best shot.

“10 Cloverfield Lane” is a stylistic sequel to the 2008 movie “Cloverfield.” Which is to say, this movie tells a totally new story that has a similar feeling to the original, but it’s not at all a traditional sequel. It’s very effective at establishing an atmosphere of uncertainty. We are able to identify with the heroine, Michelle (Mary Elizabeth Winstead), but we aren’t sure about the other two main characters – we don’t know who they are (really), where they come from, or whether any of the things they say are true. It’s an interesting story and an even more interesting way to tell it.

I like movies like this one because it forces you to become an active viewer. Just like Michelle, we are constantly kept guessing. Howard (John Goodman) sounds genuine, but he also sounds more than a little crazy. But there are hints and clues that are just believable enough to make Howard’s incredible story credible, and just enough character traits that leave us uncertain about the sincerity of Howard’s actions. We learn more about Howard, and about the situation they find themselves in, at the same time Michelle does. When new information is revealed, we are forced to process it along with Michelle.

The downside of storytelling like this is that you need to have half a brain to understand what’s going on because this movie doesn’t tell you, it shows you. This can make for some confused audiences and, as a result, I predict mass transgressions against the first of the Moviegoer’s 10 Commandments in theaters this weekend.

“10 Cloverfield Lane” works because the protagonist is intelligent and believable. She thinks quickly and reacts to her circumstances realistically. She is inventive and pragmatic, and sees the world (and her counterparts) with experienced and wary eyes. You don’t get frustrated at Michelle making stupid choices, because she doesn’t. These are the reasons the movie works, and why it’s a little better than your run-of-the-mill genre picture.

It’s not a perfect movie; in particular, the big reveal is a little goofy and a bit of a letdown that detracts from what preceded it. But overall, it’s an enjoyable time at the movies.