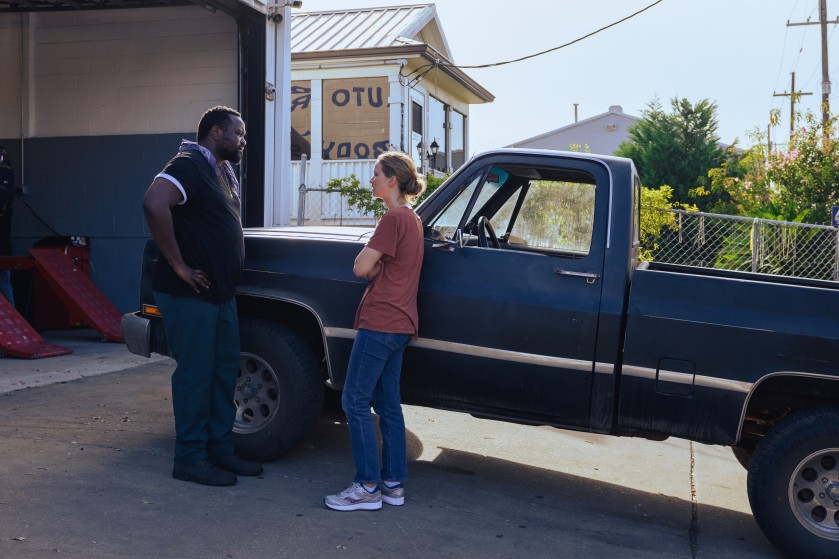 It’s tricky to tell a story about the impacts of trauma, and director Lila Neugebauer handles the subject with a sensitive, deft hand in her feature film debut “Causeway.” This intimate independent film is one with a narrative of pain, healing, and friendship, culminating in an extremely effective (and very human) drama.

While in Afghanistan working for the Army Corps of Engineers, Lynsey (Jennifer Lawrence) was part of a convoy that was attacked and hit by an explosive device. She suffered significant injuries to her body and brain, and has spent months in a tough rehabilitation program. Now the woman is finally going back to her home in New Orleans, where she is having difficulties adjusting to her return to normal society. As is the case with many veterans, Lynsey wants to redeploy, but her doctor refuses to give her the recommendation she so desperately wants. To pass the time, she takes a job cleaning pools, and when her truck breaks down on the way to work, Lynsey meets a mechanic named James (Brian Tyree Henry). The two form a bond through their mutual traumatic pasts and wounds both psychological and physical, which turns their relationship into something more complex.

The story is one of anguish, but also one of healing. You can feel the sense of inner turmoil and torment that weighs down on James and Lynsey, sinking their will to live. It’s a deeply intimate drama with a simple, strong story that makes a huge impact. Neugebauer’s film and storytelling are both beautifully crafted, further refined by the powerful, reserved performances from Lawrence and Henry (which are also among the two actors’ best work to date). Their chemistry is believable and their performances aren’t flashy, which makes for a powerful drama about broken people who need help and find it in each other.

“Causeway” is painfully eloquent in a way that makes it so much more than just another trauma drama. It’s a somber look at the way humans must suffer in order to heal, and the film captures this sentiment and feeling in the most potent way.