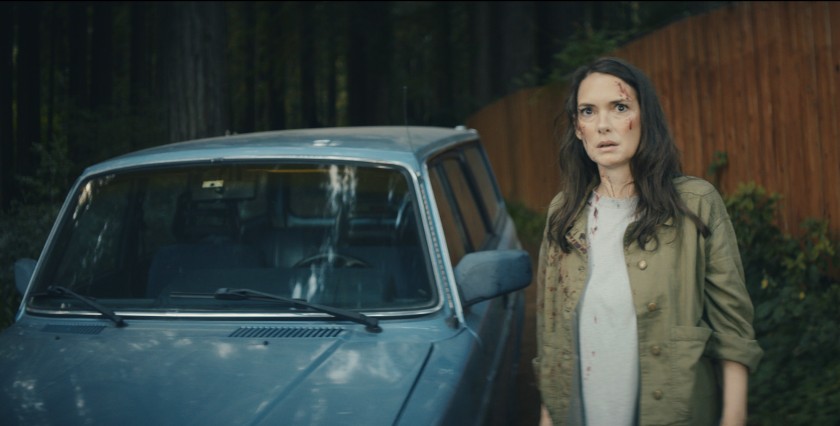 What starts as a double booking of an Airbnb turns into a week of horrific revelations in director Eli Horowitz‘s “Gone in the Night (The Cow),” a twisty thriller that plays with themes like the carelessness of youth, the fear of death, and coming to terms with your own mortality. It’s more thoughtful than scary, but delivers a satisfying take on the genre.

Fortysomething Kath (Winona Ryder) is in a rut with her younger boyfriend, Max (John Gallagher Jr.). When he surprises her with a getaway at a secluded cabin in the woods, she at first refuses, but then decides the spontaneity would be good for her.

You see, Kath is very sensitive to the age difference and is easily convinced to try new things in an effort to stay young. It’s the reason why, when the couple arrive at the cabin only to find Al (Owen Teague) and his girlfriend Greta (Brianne Tju) inside, Max convinces his significant other to stay anyway.

The strange guests make Kath suspicious, and the younger woman is causing her to feel a twinge of jealousy. The next morning, Kath wakes up to find Al alone, crying in the woods. It appears Max and Greta have run off together after a night of fun.

It’s a great foundation for building a mystery, especially when Kath decides she needs to investigate what happened that night. Obsessed with discovering the truth of why her boyfriend suddenly left her, she enlists the help of the cabin’s owner, Barlow (Dermot Mulroney), and the two quickly develop a friendship. It’s only when Kath digs deeper that she uncovers the strange truth about what really is going on in the woods.

The script (by Horowitz and Matthew Derby) is original with an unconventional mystery. The film opens with a classic horror movie setup, with the couple driving through a forest at dusk, headed off the beaten path to a home with poor cell phone reception. You’d think it would be a breeze to guess where the story would go, but the co-writers take it in several different directions.

The structure of the storytelling is very effective, with the narrative jumping around in time, revealing a tiny trail of breadcrumbs. This keeps the viewer engaged in the mystery, as Horowitz only allows his audience to have a certain amount of knowledge at predetermined intervals.

Once the (admittedly ridiculous) big reveal is exposed, it feels like a huge letdown — until it’s not. There are several surprises in “Gone in the Night (The Cow),” and they’re all successful. Try to avoid spoilers before seeing this one because part of the fun is attempting to guess the outcome of this unpredictable story.