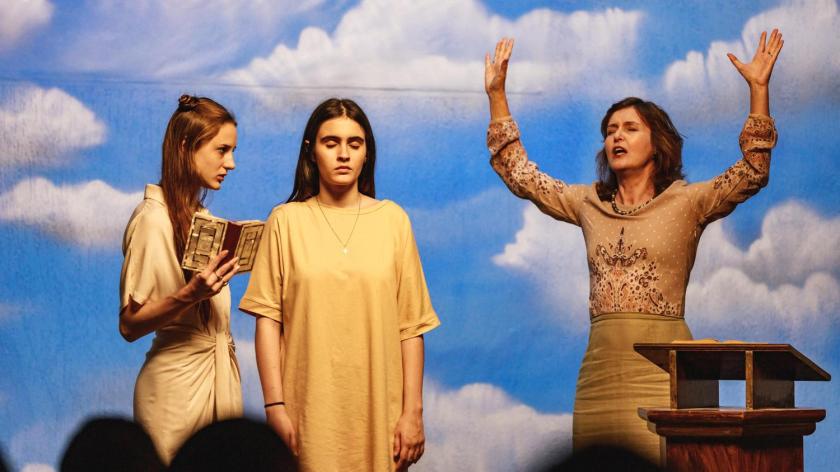 The Bible is a sexist text with many disturbing, anti-woman passages that many believers choose to ignore. The bold, thought-provoking “Raquel 1:1” challenges this head on with a confrontational, creative script from writer / director Mariana Bastos. The story not only tackles the overt chauvinism in the world’s most popular religious book, but it deals with deeper themes of devastating trauma and blind faith.

Raquel (Valentina Herszage) suffered an unspeakable tragedy when she was younger and tragically lost her mother. Turning to religion to ease her pain, the teenager moves to a small town to live with her father (Emílio de Mello) to start a new life. She quickly makes friends with a group of girls from the local evangelical church and one afternoon, they go for a swim in the woods. Raquel wanders off and has a mysterious vision that she believes is a divine intervention. She starts to believe that her spiritual awakening is a sign that she needs to rewrite the Bible, making it more pro-female. This causes the townspeople to turn abusive, with some accusing her of being a heretic witch.

It’s a thoughtful, sophisticated story that hopefully will spark debate. Raquel is a strong feminist character who doesn’t think twice about questioning the content of Christianity’s most important text, especially the parts that are demeaning to women (like requiring them to remain submissive to their husbands, or the impurity of menstruation). She’s a true believer who has issues with sexism and dares to question.

Raquel is a brave character in that respect, especially when her religion didn’t bring much comfort or help her family when she and her mother needed their God the most. It’s a strong and meaningful script, with deep layers and even deeper insight.