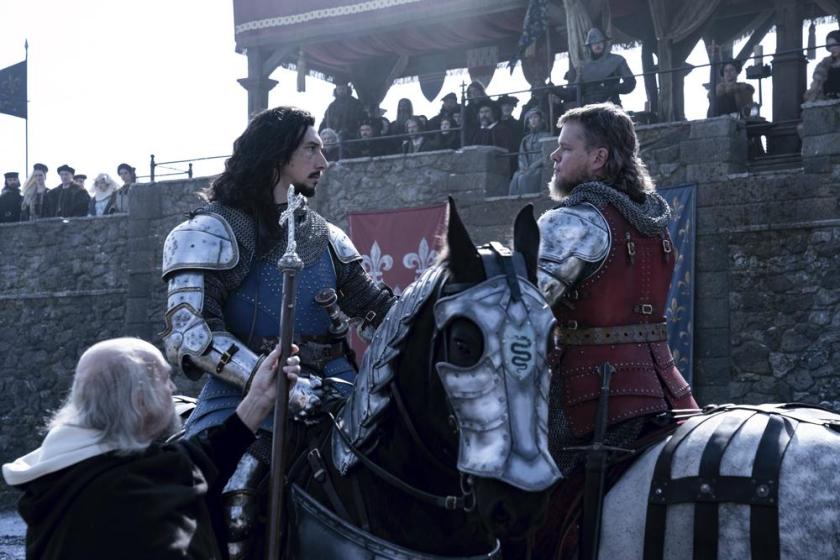 Color me a little surprised at the strong negative reaction I had to the historical drama “The Last Duel,” director Ridley Scott‘s lavishly-costumed, epic big screen take on Eric Jager’s 2004 book (The Last Duel: A True Story of Trial by Combat in Medieval France).

On the surface, the film appears to offer meaningful statements about misogyny and celebrate the idea of female courage. Only after a deeper examination did I realize that it really doesn’t. Everything about this film left me unsettled in all the wrong ways. On top of that, did we really need another movie about a rape?

Set in France in the late 1300s (and based on actual events), the film tells the story about the country’s last sanctioned duel between Jean de Carrouges (Matt Damon) and Jacques Le Gris (Adam Driver), two friends turned bitter rivals after Le Gris is accused of raping Carrouges’ wife, Marguerite (Jodie Comer). Defying the norms in an act of bravery, Marguerite comes forward to publicly name her attacker, although he denies it vehemently. An eventual trial by combat leaves their lives (and the truth) in the hands of fate as the two men battle to the death.

The story (co-written by Damon, Nicole Holofcener, and Ben Affleck) is told in a clunky three chapter structure, with each section focusing on the individual perspectives of the trio of main characters. All see the same events through different lenses, each one shining a light on their own version of the facts. While the screenplay does have one female writer, the movie feels like a case of women’s issues told from a male perspective. (It doesn’t capture the authentic experience in a way like last year’s “Promising Young Woman” did, for example). The story is unpleasant and unsettling in its reminder of how society’s systems have always been set up to protect men and discredit women. That alone would (and should) upset audiences, but there’s more that’s distressing here.

The major issue I have with “The Last Duel” is one that leaves a really bad taste in my mouth: Marguerite’s story of what happened is told last. Her version is referred to as “The Truth” in the final title card, giving an even greater weight to the woman’s personal account. It’s undeniably the most essential chapter, yet a film that champions itself as having feminist themes also puts its heroine’s story in the backseat while placing more importance on the action-packed, bloody fight to the death.

Shhh, dear: the men are dueling.