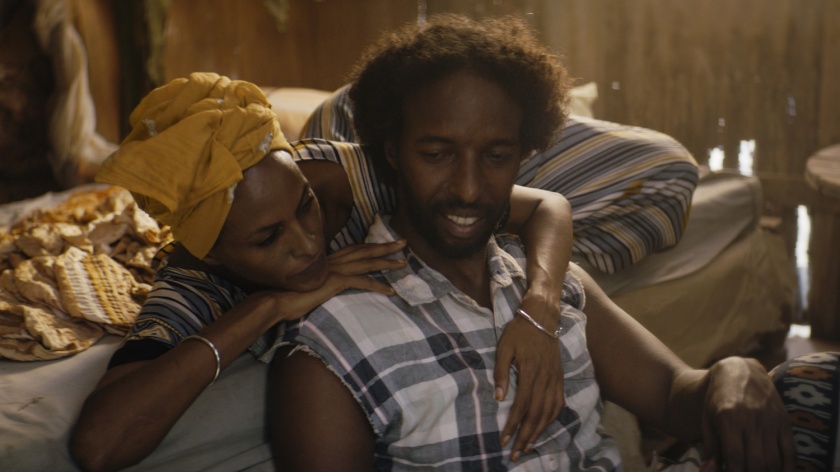 Somber love story “The Gravedigger’s Wife” is a bleak but touching tale of a loving husband who will do whatever he can to save his dying wife. This slowly-paced film doesn’t have an elaborate plot, making it more of a contemplative and nuanced experience rather than an entertaining one.

Nasra (Yasmin Warsame) urgently needs an expensive operation, or she will die. Her devoted husband Guled (Omar Abdi) performs backbreaking work as a grave digger just to make ends meet for their family. With money desperately needed for the lifesaving operation, their son Mahad (Kadar Abdoul-Aziz Ibrahim) begins to find ways to make a few coins by washing windshields and other small tasks. Wanting to set a good example and provide for his family, Guled returns to his village where he was shunned years before. The man’s long, solo journey proves arduous, but what he faces when he returns is much more harsh.

This story is one of pure love and strong-willed determination. Guled is an extremely sympathetic lead character, and Abdi portrays the man with grace, dignity, and sadness. It’s heartbreaking to share in the helplessness Guled feels when the love of his life and the mother of his son is terminally ill and dying. He is powerless despite his best efforts. The man eventually begins to accept his wife’s fate, all while hoping others die so he can earn enough money to keep her heart beating.

Writer / director Khadar Ahmed pulls back the curtain on a slice of life that many will never see. The film is set on the outskirts of Djibouti City and features an entire cast of non-professional actors who were cast right off the streets. This gives the film a realism that lends a deeper meaning to the story.

Watching struggles like the ones the characters experience in “The Gravedigger’s Wife” isn’t an enjoyable exercise, but it certainly is eye opening.

This film was screened for review at the 2021 Toronto International Film Festival.