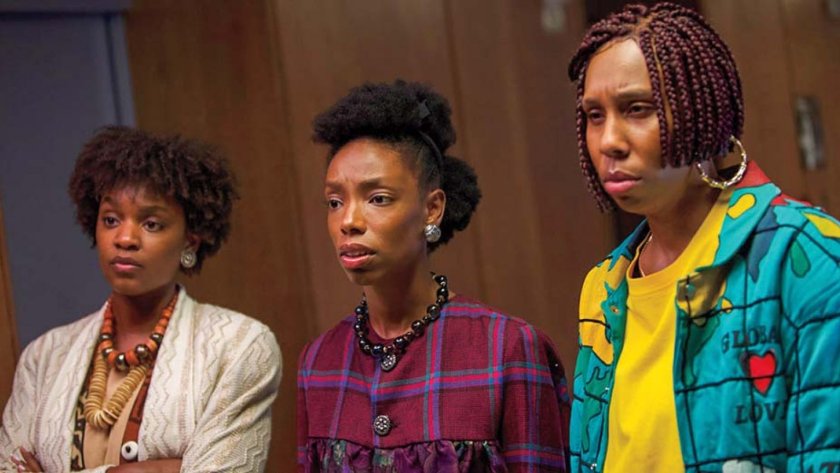 This film was screened at the 2020 Sundance Film Festival.

While audiences are thankfully seeing more female-driven horror films in the movie world, black female horror is even more of an anomaly. That’s why writer / director Justin Simien‘s “Bad Hair” is so damn interesting. The story of one woman’s ambition and her (literal) killer weave is an absurd yet astute satire of popular culture with a meaningful message. This is one you’ll be talking about long after the final credits roll.

Set in Los Angeles circa 1989, Anna (Elle Lorraine) prefers the au naturel look after a traumatic childhood hair accident left her with a burned scalp. She’s a hardworking assistant on a music video show for the Culture television network, but struggles to get a promotion due to the way she looks. When Anna’s supportive boss is fired and a former supermodel (Vanessa Williams) is brought in as a replacement, Anna is scared of being let go and decides to do something about her appearance. She gets a gorgeous new weave and learns her flowing locks may just be the key to success that she was missing — until her hair gets a taste for blood.

The hair-raising (snort!) story is cleverly based on fictitious slave myths and superstitions that weave in (pun intended) the idea of mystical African folklore in relation to what the horror of everyday life feels like (including the pain some endure in pursuit of beauty) for black women in America.

“Bad Hair” is a nontraditional horror film that’s presented in a traditional way. There are jump scares and a silly finale, but Simien blends humor with horror in this campy thriller.

It’s also a pensive style of social horror that will likely be more meaningful to women as well as people of color. The film tackles the absurdity in everyday life and in particular, the system of oppression that preys on African-American women the most. The women in the film are tricked into becoming their own oppressors, all in the name of fitting in with what society defines as beautiful.