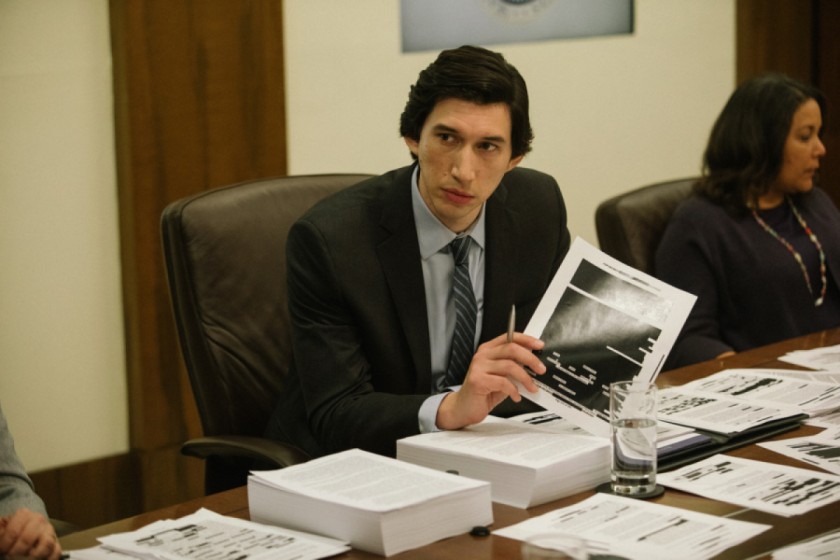 Think of “The Report” as an educational lecture rather than a piece of entertainment. The film tells the story of Daniel Jones (Adam Driver), lead investigator for the U.S. Senate’s sweeping study into the CIA’s Detention and Interrogation Program following the September 11th attacks. Jones exposed the Agency’s use of torture and concluded that the brutal methods were as ineffective as they were inhumane.

The film has an important story to tell but plays like a heavy-handed t.v. movie, a small screen drama with big name actors. Annette Bening is terrific as Senator Dianne Feinstein, Jon Hamm is appropriately detached as White House Chief of Staff Denis McDonough, and Driver’s restrained performance of anger and growing frustration provides a solid anchor.

Scott Z. Burns‘s direction is pedestrian but gets the job done. The script (also by Burns) is basic to the point where it spells things out so clearly that the characters might as well turn directly to the camera and say “can you believe the Republican-led White House approved this stuff?”

The film isn’t as partisan as you’d expect, as it makes several well-deserved digs at both the Bush and Obama administrations for allowing these programs to continue and grow, for working to keep the report from seeing the light of day, and for a colossal failure to prosecute those responsible for carrying out the torture. It also spurs a debate about the necessity for efficient checks and balances within our own government.

Many hold Jones out as a hero for his hand in exposing what our country shouldn’t be. There are disturbing re-enactments of horrific government-sanctioned torture of suspected terrorists, with one man working tirelessly to try to get the truth out that enclosing people in coffins with live insects, blasting heavy metal music as a means of sleep deprivation for 4 straight days, and forced enemas doesn’t get the confessions you so desperately want.

The level of immorality is appalling, and it’s even more sickening to think that of the 6,700 page report, only 528 pages were made public. This political drama will hopefully make everyone who watches it question the methods of interrogation used in the future and demand more transparency from our leaders.