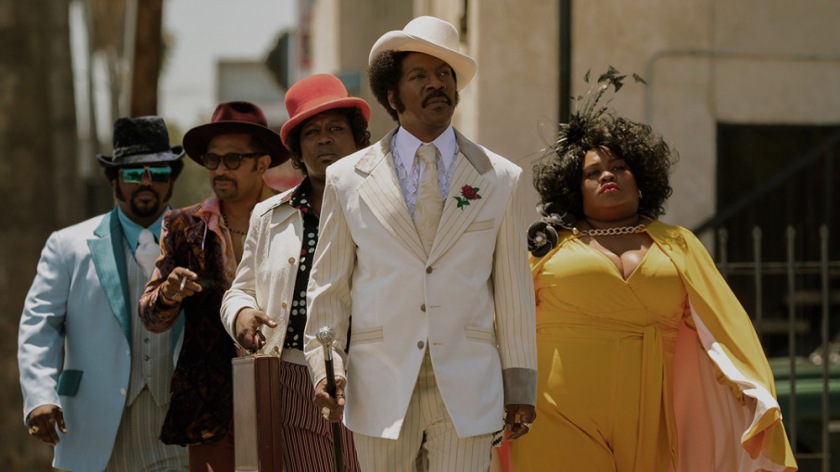 Rudy Ray Moore may be an unlikely subject for a crowd-pleasing biopic, but “Dolemite is My Name” captures the perfect underdog charm for the Blaxploitation icon’s stranger-than-fiction life story. Moore is known as the “Godfather of Rap” because he got his start making records with profanity-laced rhyming poetry, but he made iconic contributions to black cinema in the 1970s with his homemade hit film, “Dolemite.”

Eddie Murphy takes on the lead role as Moore, and it’s one of the best scripts he’s had to work with in years. It’s often easy to forget how funny Murphy truly is, and this film lets him show off his comedic talents. Murphy dives right into Moore’s alter-ego Dolemite, a pimp with a cane and a surplus of obscene fables.

The film is nontraditional and inspirational, telling a story about making dreams come true that’s both optimistic and crass. It’s hard not to be charmed by Moore’s anti-establishment, entrepreneurial spirit and artistic ambitions. Moore starts out recording bootleg comedy albums in his living room and after their success in minority neighborhoods, he decides to make a film that the people want. The majority of the film tells the story of the making of “Dolemite” and how one man was able to convince a politically conscious playwright (Keegan-Michael Key) to pen a wild script that includes kung fu fighting, beautiful ladies, and car chases.

It’s hard not to cheer for Moore and his menagerie of misfits (including Mike Epps, Craig Robinson, and Da’Vine Joy Randolph) as they create the art they want to make — and on a shoestring budget to boot. (Think shades of “The Disaster Artist” and “Bowfinger”). There are mishaps along the way, but here is an artist who wants his unique voice to be heard, weather it’s by recording his own comedy routines or making his own feature film. The finished product becomes a runaway box office smash and a defining movie of the era.

The story here never gets too serious, and it’s not a particularly in-depth look at the more weighty themes that are raised through mid-70s black culture films (like the controversy about negative stereotypes among the African-American community). Director Craig Brewer instead chooses to keep things light with a nice mix of humor and heart.

Moore was a true pioneer of the Blaxploitation genre, and in a way he was a man ahead of his time. He knew what people wanted and gave it to them, much like this easy-to-swallow Netflix original film.