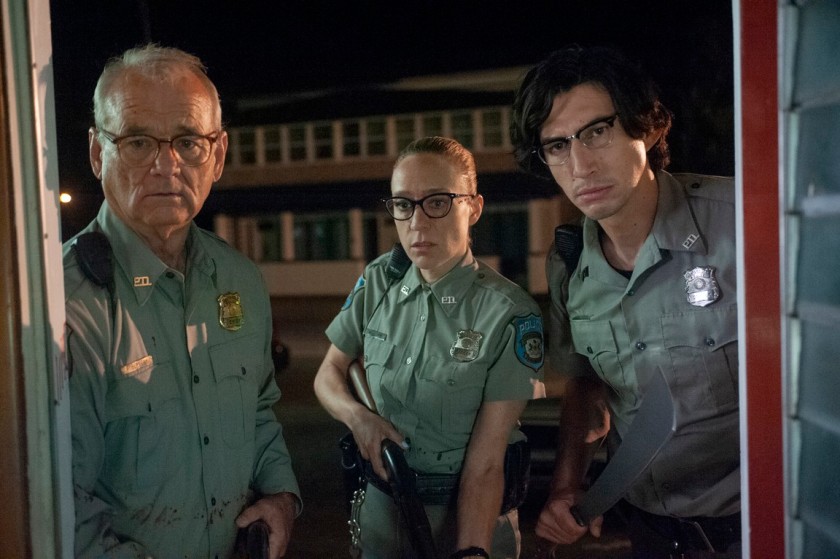 It’s a well-known fact in the world of cinema that Jim Jarmusch is an acquired taste, but fans of the director’s sarcastic wit and dark humor will love “The Dead Don’t Die,” a wacky, subversive, genre-blending zombie film that’s one of his best works in years. I am head-over-heels ecstatic about this movie, and it’s by far one of my favorites of the year.

The sleepy little town of Centerville is “A Real Nice Place,” just as the welcome sign suggests. That is, until the moon hangs low in the sky, surrounded by purple flames. It’s still daylight at 10 pm, and all of the town’s animals have run away. Scientists give ominous warnings as fracking has caused the Earth to spin off its axis, but nobody is prepared for the most dangerous repercussion of all: the dead rising from their graves.

If you’re expecting a typical, by-the-book zombie movie, prepare to be disappointed. There are plenty of scenes of the walking dead as they stumble around hungry and in search of human flesh, but think of this as more of a hipster style zom-com. It’s politically relevant, filled with social commentary, and packed with an arthouse cool that will delight brainy cinephiles.

The film has an inspired, worthy-of-name-dropping, superstar indie cast, including Bill Murray, Chloë Sevigny, and Adam Driver as a trio of surprisingly competent town cops, Caleb Landry Jones as a supergeek gas station attendant, Steve Buscemi as a resident farmer (and Trump supporting racist), Danny Glover as a kind hardware store owner, Tom Waits as a wise hermit who lives deep in the woods, and perhaps the most inspired casting decision of them all: Tilda Swinton as an outrageously weird Scottish mortician who happens to be a master in the samurai sword. Each character is introduced in personal vignettes at the start of the film, with their story arcs intersecting by the end.

Jarmusch stuffs his tale with the deadpan comedic tone and irreverence that fans have come to expect. Many of the one-liners seem destined for a goofy cult status, and the self-aware characters throw horror conventions to the wind. This is the type of film that could have a long, prolific theatrical run at midnight screenings, once it finds its impassioned audience.

The story leans heavily towards the fun rather than the gory side of zombie movies, but there is a fair share of blood and guts to be found here. It’s not the type of film where you can shut off your brain and watch as the undead feast on the living, however. Jarmusch is consistent with his worldview as he sticks to what he does best: just plain, unadulterated weirdness with a tinge of social commentary.

The film starts to buckle under the weight of its themes as it gets a bit too heavy-handed with its rants on mindless consumerism near the end (yes, we know: many of us are simply going through the motions of life as near-comatose zombies), but this is one quirky, spirited, unforgettable ride.