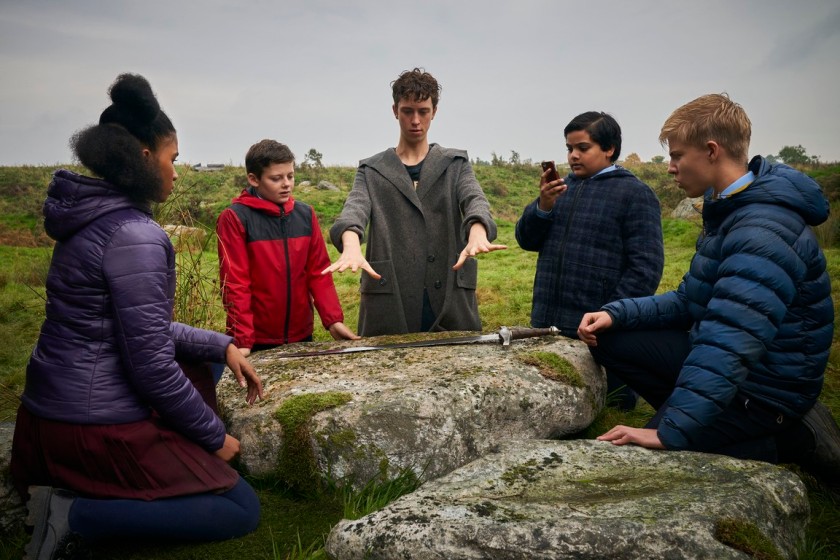 The timeless legend of King Arthur is repurposed for a new generation in “The Kid Who Would Be King,” a rapid-paced, old-fashioned, throwback quest story that’s great for kids as well as adults. The film recalls the heyday of the PG-appropriate adventures from the mid-80s (“The Goonies,” “E.T.”), where a good blend of scary and exciting elements added up to a fun time at the theater.

Magic meets the modern world when Alex (Louis Ashbourne Serkis), often bullied at school by the bigger kids, finds the mythical sword Excalibur. He’s sure it can’t be real, until he’s visited by minions of the wicked enchantress Morgana (Rebecca Ferguson) and the wacky wizard Merlin (Angus Imrie, Patrick Stewart). The future is at stake, and it’s up to Alex to step up and become a leader by uniting his friends and former foes (Dean Chaumoo, Rhianna Dorris, Tom Taylor) and forming his own band of knights to battle the evil that lies beneath.

This magical adventure takes classic thriller elements and age-appropriate humor to create a great film for kids. Director Joe Cornish isn’t afraid of going too dark, and some of the more intense scenes will likely scare younger, more sensitive viewers (I’d guess this film is great for ages 8 and up, but parents should exercise caution if they have a child who is easily frightened). The special effects are quite good, with trees that come to life, winged dragon-like creatures, and fire demons tearing up a school. It’s creative, even if there’s too much visual noise towards the end.

The cast is ridiculously charming, and the kids rule the day. Adults take the backseat in this story, and that’s what makes it work. It’s fun to watch heroic preteens take charge and save the world, especially when the battleground reaches their own school. They even go so far as to putting the teachers under a spell since they’ll just get in the way.

The film (with an over two hour run time) moves along at a brisk pace until the final battle scene bogs everything down. It’s drawn out and outstays its welcome, feeling like a tacked-on time extender after a natural end to the movie. Although it’s too long, this is a mythical, imaginative movie that the whole family can enjoy.