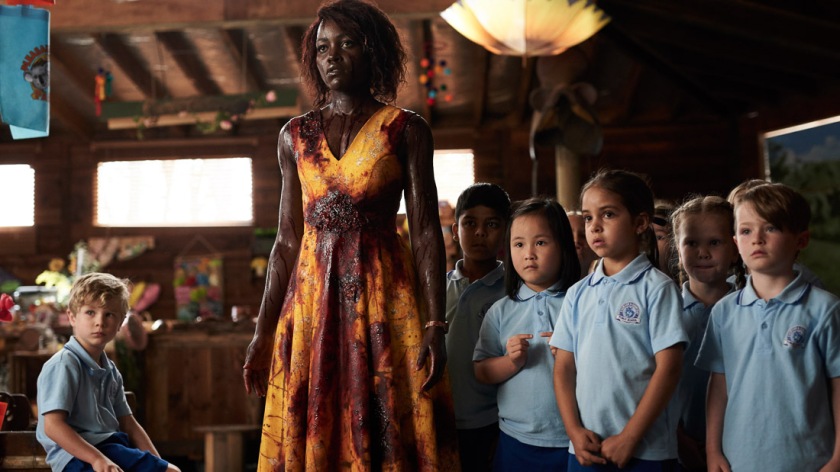 Just as the wildly original “Anna and the Apocalypse” created its own holiday / musical branch of the zombie genre, “Little Monsters” forges a path into the new sector of the feel good movie about the undead. This unrestrained, hilarious exercise in absurdity truly is something special.

Street musician Dave (Alexander England) is having a rough go of it. After an inspired extended opening sequence of a nonstop argument between the man and his live-in girlfriend, the couple initiate a bad breakup. With nowhere else to go, Dave moves in with his sister and his five year old nephew. Dave spends his days teaching the young boy all sorts of bad habits, from choice curse words to playing hyper-violent video games. It may be love at first sight when Dave drops his nephew at school and meets the sunny kindergarten teacher Miss Caroline (Lupita Nyong’o). Jumping at the chance to impress her, Dave volunteers to help chaperone the class field trip to a petting zoo.

There’s an Army base conducting experiments on the walking dead next door, and the zombies get loose and begin terrorizing everyone. There are dozens of other schoolchildren at risk, as well as Teddy McGiggle (Josh Gad), an obnoxious children’s television personality who happens to be filming on location on the very day of the incident. Miss Caroline, Dave, McGiggle, and the kindergarten class become trapped in the gift shop with no way out, and must rely on their resourcefulness to survive.

The premise is absolutely uproarious in itself, and the witty film is packed with a very funny blend of inspired and low-brow humor. Gad brings comic relief in the form of his drunken, foul-mouthed host, and England has a laid-back McConaughey vibe with flawless comedic timing. N’Yongo is delightful as the sweet-natured educator who becomes a zombie-slaying badass when it comes to saving her class from being devoured. The supporting cast of kiddos have oodles of personality too, rounding out an incredibly charming bunch of characters.

Writer-director Abe Forsythe doesn’t slow down and keeps the jokes coming. There’s a frenzied energy and brisk pace to this well-made film, including several unexpected, uproarious, applause-worthy scenes to keep the audience involved. These are characters you’ll want to actively root for. And yes, there’s even a ukulele solo to Taylor Swift’s “Shake It Off.”

For fans of the zombie genre, this low budget comedy has outstanding horror effects. Although the story is campy, the makeup never looks cheesy. It helps that the film doesn’t take itself too seriously. (Case in point: when one of the Army guys asks if they’re the “slow or fast?” kind when he learns zombies are on the loose).

“Little Monsters” is the irresistible, touching, big-hearted zom-com we’ve all been waiting for. It has cult classic written all over it, and is one of the highlights of the Sundance Film Festival this year.