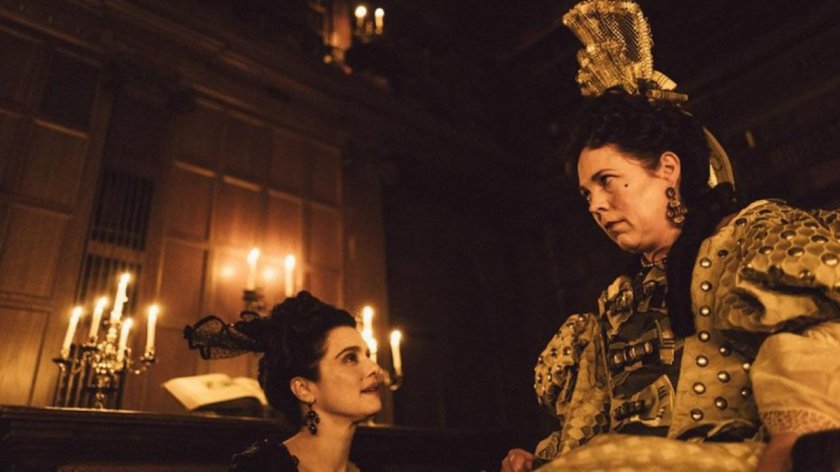 If you’re familiar with director Yorgos Lanthimos and his other projects (“Dogtooth,” “The Lobster,” “The Killing of a Sacred Deer,” “Pity“), you’ll no doubt be a fan of “The Favourite,” his latest tour de force of women behaving badly. This period film takes all expectations of a witty comedy of manners and promptly turns them upside down. No, no: “turns” is too polite. It’s more accurate to say he forcefully shoves them until they fall squarely on their bottom.

The film is set during the early 18th century when England is at war with France. Frail Queen Anne (Olivia Colman) rules the throne while her close friend Lady Sarah Churchill (Rachel Weisz) has her ear and, in essence, actually runs the country. Sarah is a tireless companion, devoted to pacifying and caring for the Queen. While she excels at soothing the ruler’s unpredictable, fiery temper, Sarah is driven by a ravenous desire to be in total control.

Everything is thrown into even more disarray when distant cousin Abigail (Emma Stone) arrives, a now-servant who used to live the aristocratic lifestyle. Seeing (and seizing) an opportunity to climb the ladder back into the life she once knew, Abigail schemes to become the Queen’s new best confidant.

The story is an audacious portrayal of female power, one that’s fraught with passion, emotional resentment, and sexual manipulation. Instead of men holding authority over them, these women are squarely in control — albeit they’re trapped in a cycle of dominance and submission with each other that’s intensified by a catty nastiness.

The timely subtext is boosted by career-best performances from all three leads. Stone is comfortable with a wicked style of mischievous comedy, and Weisz delivers acerbic dialogue with an ease like no other. The star-stealing turn comes from Colman, who takes anguish and grief to a new level with a pathetic despondency. None of these characters are likeable, but all manage to elicit pity at certain points in the story.

There’s a sadness that lies underneath the surface which makes the film even richer. The horrors and heartbreak that result from the drive to win at all costs (and at the expense of a miserable and pathetic Queen to boot) gives a darker twist on the period costume genre. There’s a disturbing nastiness and cruelty that’s accepted in the political and wealthy circles, and the unbridled desire to possess the most power, coupled with greed and jealousy, is a recipe for a ferociously poetic tale of political ambition run amok.

As is his trademark, Lanthimos has the uncanny ability to simultaneously delight and disturb audiences with an unsettling, edgy strangeness. This film is a bit more straightforward (and a lot less violent) than his previous works, and it’s also more beautiful. The extravagant costumes, impressive set design, and Robbie Ryan‘s elegant cinematography are all among the very best of the year.

This surefire Oscar contender is a bawdy, twisted, and unsettling film that is guaranteed to be discussed in creative circles for years to come.