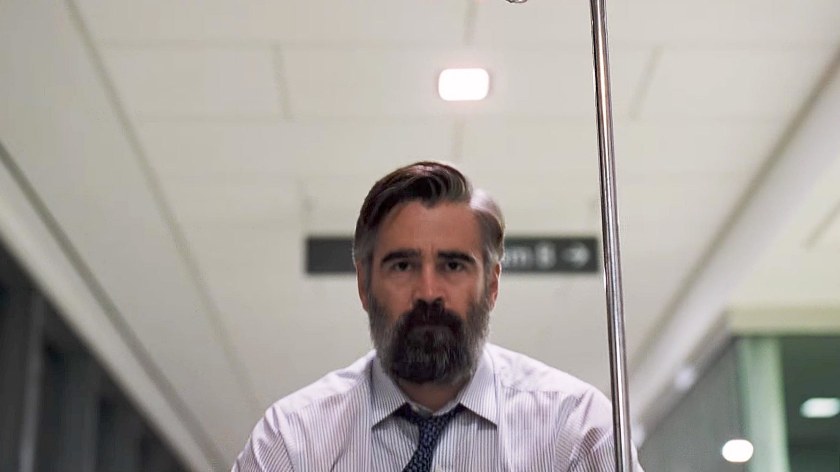 You either love him or hate him, and I am a big fan of director Yorgos Lanthimos. I feel like this is an important fact to disclose before launching into my review of his latest film, “The Killing of A Sacred Deer.” If you’re unfamiliar with Lanthimos’s work and you aren’t the type of viewer who appreciates the abstract or being challenged by film, you may want to stop reading here. For those of you who know the director (“Dogtooth,” “The Lobster“) and are fans of the grotesque and macabre, this one may be right up your alley.

Heart surgeon Steven Murphy (Colin Farrell) is happily married to his ophthalmologist wife Anna (Nicole Kidman) and dotes on their two perfect children, Bob (Sunny Suljic) and Kim (Raffey Cassidy). The family exists within their comfortable life in the suburbs until, after an unfortunate death on the operating table, Steven takes the deceased patient’s strange teen son Martin (Barry Keoghan) under his wing. It turns out that Martin is the incarnate of pure evil, and he issues a nightmarish ultimatum to the family that doesn’t end well for anyone.

Lathimos knows how to cast his stories with leads who have a flair for the bizarre, and even the supporting players (Alicia Silverstone, Bill Camp) add a distressing tone to the story. The acting is of note across the board, with Farrell slowly imploding as a rational man who is taken down by his own rationality in an irrational world (got it?) and Kidman deliciously understated as a mother with several emotional defects who also refuses to admit defeat. But the one to watch here is Keoghan, doing a 180 from his role in this year’s “Dunkirk” and stealing the show as a menacing, awkward, and brutal monster.

The story of domestic bliss that uncomfortably burrows into a horrific nightmare is destined to shock, offend, and disgust by design — that’s Lanthimos’s calling card after all. While this exercise is starting to get less and less jolting with each film, I’m not sure if that’s a criticism that reflects on the director so much as it reflects on the audience.

The sense of agonizing fear, formidable dread and discomfort is constant, and even more haunting is the calculated, almost inelegant pacing that’s punched up by the emotionally vacant characters. These people speak in monotones and go through the motions of life with rigid, robotic mannerisms, using as few words as necessary. It’s a bit of a genius move in the context of the story; an agitating and disquieting display that not only serves to keep the audience at a distance but builds distressing tension and suspense. You’ll not only have an emotional reaction to this film but a physical one as well.

For two hours Lanthimos pushes viewer’s buttons to the extreme, taking his time with a deliberate, slow unfolding of the story before he launches into a hypnotically idiosyncratic, disturbingly violent, savagely symbolic viewpoint that is drawn from the tragedies of Greek mythology, the harsh underbelly of human nature, and the consequences of bad decisions. This is an extremely cynical viewpoint that takes an unsettling revenge tale to a new level of alarming (and oftentimes darkly funny) absurdity (pay particular attention to the scenes in the principal’s office, a discussion about eating spaghetti, and an obsessive conversation about armpit hair).

The attention to detail is astounding, and the unnerving, stressful original score ramps up the tension to almost unbearable levels. “The Killing of a Sacred Deer” certainly is not for everyone, but those who appreciate the director’s work will find the film, and especially its finale, greatly rewarding.