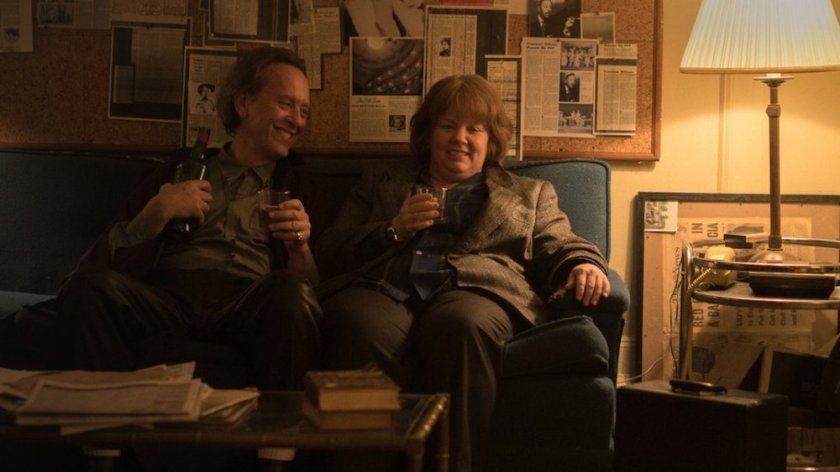 For those of you who still only know Melissa McCarthy from her “fatty fall down” empty-headed comedy films, please go see “Can You Ever Forgive Me?” so you’ll learn once and for all that she’s a phenomenal dramatic actress. It’s not that she isn’t funny, but McCarthy isn’t often given roles that showcase her serious acting chops. But when she is, she always hits a home run.

To this role McCarthy brings a dejected picture of the human nature of loneliness, with an uncanny ability to create sympathy for the complex, difficult, and disgraced best-selling author, Lee Israel. She also nails a likeable-yet-not sarcasm that comes from her character thinking everyone else is a complete idiot.

The film tells the true story of celebrity biographer Israel (McCarthy), a woman who had her writing heyday during the 1970s and 80s. When the appetite of readers changed from nonfiction to fiction in the early 90s, Lee found herself unable to get published. Facing eviction from her apartment and unable to afford medical care for her sick cat, she turned her art form into deception by penning fake letters she claimed were written by historical figures. Abetted by her loyal friend Jack (Richard E. Grant), the duo sold hundreds of forgeries to dealers in New York City before eventually having to face the music — and the FBI.

It’s a fascinating story that makes for an equally intriguing caper. Director Marielle Heller creates a drama with just the right amount of dark humor that sets a cynical, shrewd tone. The misery and heartbreak (exemplified by a particularly affecting scene in a restaurant) are overshadowed by the warmth and authenticity of Lee and Jack’s friendship. Grant is ever the scene stealer with his boy-toy escapades and self-destructive charm. His performance is balanced by McCarthy’s nuanced sorrow of self-imposed solitude in the soul-crushing city. Both are worthy of awards consideration this year, and I hope they get it.

Screenwriters Nicole Holofcener and Jeff Whitty, who adapted the story from Lee’s memoirs, give a touch of caustic wit to the screenplay. It would’ve been too easy to strip all warmth from these characters, both quite the a-holes in their own right, but instead there’s a warmth that draws you closer rather than pushes you away. The same can be said for Heller’s direction. There’s a bonafide personal air of melancholy to her deeply human filmmaking.

Everything about this understated film hit the right notes for me, and it is one of the very best I have seen this year.