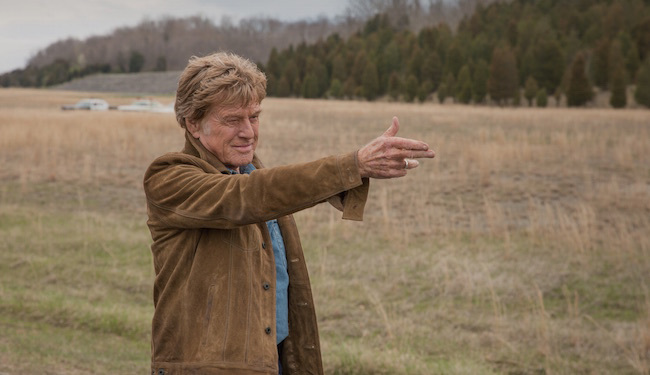 Writer / director David Lowery‘s “The Old Man & the Gun” paints a soulful picture of a life well lived, both onscreen and off. It’s only fitting that this film is supposedly Robert Redford‘s last movie, one final performance before he retires from the world of movies for good. Redford’s star appeal is one that’s never faded, and one that’s never been more evident than it is here. This iconic, irresistibly charming actor saunters through his scenes as an aging hustler with wrinkles that are punctuated by an ever-twinkle in his eye. No other actor could have played this part better.

The film tells the story of real-life career criminal Forrest Tucker (Redford), a senior citizen who spent a lifetime robbing banks and running from the authorities. Tucker escaped from San Quentin when he was 70 years old after an unprecedented string of heists that evaded authorities and enchanted the public. It’s hard not to root for this character, especially when the film places a melancholy fondness on a criminal’s hard-earned wisdom.

The opening sequence is one of the best I’ve seen in a while, an extended, emotionally intoxicating meet-cute between the widowed Jewell (a phenomenal Sissy Spacek) and Forrest. The duo make for one of the most delightful onscreen pairings of the ages, their chemistry truly magnetic. Casey Affleck, as detective John Hunt, is effectively understated as he struggles with the dilemma of admiring the criminal or becoming a hero himself for catching him. The internal conflicts are well expressed by both men as each are captivated in the other’s commitment.

Lowery made the decision to shoot this film on actual 16mm, and the format fits the material perfectly. The cinematography lends an old fashioned yet timeless quality to this “mostly true” crime caper / romance. I love everything about how this movie looks and feels. Everything.

The story is well-told with a unique vision that taps into everything from the early qualities of Robert Altman to many of the great heist films of the 1970s. We get snippets of Forrest’s life, from a fantastic montage of his lifetime of prison breaks to his legendary riffs on life that are told through secondhand anecdotes from police officers and acquaintances. The story is well-balanced, but it could use more meat with its potatoes. I left wanting more.

While this may not go down in history as one of Redford’s greatest films, it’s filled with iconic shots, a great soundtrack, and bittersweet, award-worthy performances. The mood and tone of the film are outstanding, and viewers will find it difficult to resist the screen icon’s charms.