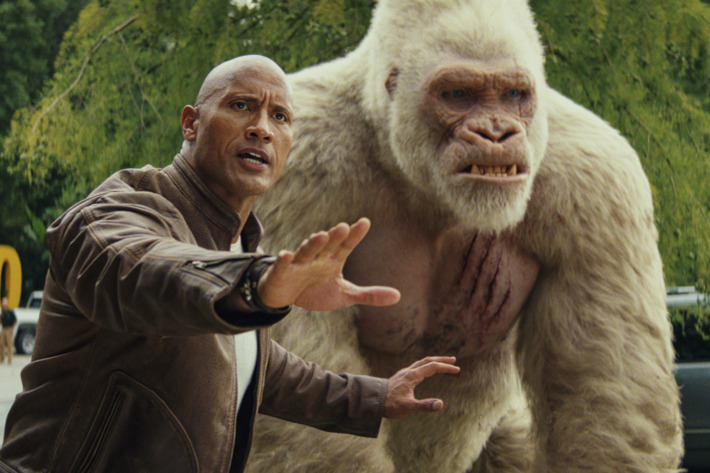 What is it with characters in disaster movies? You know the ones, they’re either military commandos or hotshots who think they know better than everyone else. At a time of crisis, they never listen to the people who actually know how to defeat the aliens / find the cure / solve the problem that could cause the potential devastation of the world. It happens yet again in “Rampage,” the half-baked CGI action extravaganza that’s based on a retro video game. The suits refuse to listen to the scientists, everything goes wrong, and everybody gets their what for. Don’t these people ever watch movies themselves? Won’t somebody please listen to the nerds?

The plot, if you can call it that, is as thin as it gets. Special forces solider turned primate specialist Davis (Dwayne Johnson) has developed a special friendship with a gorilla named George. The two communicate via sign language and share a mutual respect for each other. One evening something strange falls from space and George is sprayed with a mysterious green gas from the wreckage and by the next morning, he has grown nearly twice his size. He’s not the only animal effected: other genetic mutations include a wolf in South Dakota and an alligator in the Everglades. The trio of oversized mutant animals eventually make their way to Chicago where they begin to destroy the city. Unfortunately for the audience, it only sounds awesome.

The special effects are shockingly good, and the acting is shockingly bad. Malin Akerman is laughable with her stiff line delivery and Jake Lacy as her doofus sibling partner in crime is equally hokey. Johnson is charismatic but even he can’t elevate this utter junk. Something’s definitely amiss when the most enjoyable part of the movie is when a giant gorilla flips the bird at our hero — twice. (Upon further reflection, I feel the later scene where George makes an obscene sexual gesture is worth an extra half star rating).

“Rampage” is the bad kind of brainless entertainment. Movie gods, please don’t let there be a sequel brewing.