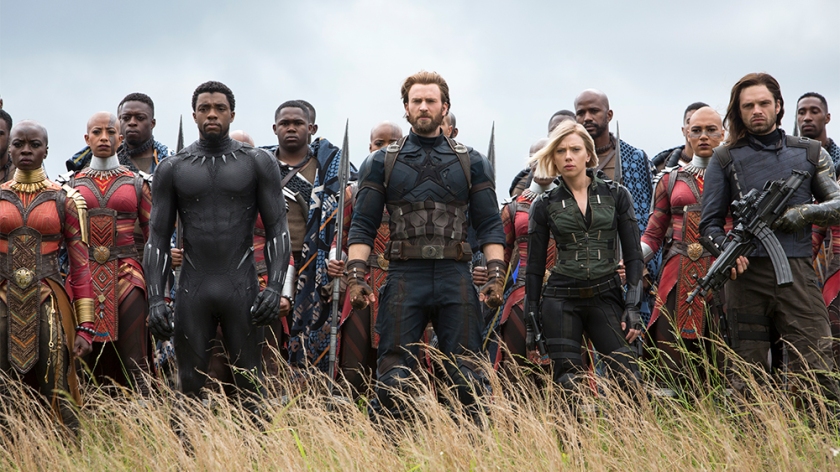 When you sit down and think about it, “Avengers: Infinity War” already has several unfair hurdles to overcome. It’s a highly-anticipated film with a massive budget (rumored to be topping the $300 million range) and even bigger expectations from both the studio and diehard fans alike. By design it’s not made to be divisive, but there will be a built-in contingent of naysayers that will long to hate it.

Marvel fans, I’m here to alleviate your fears. If you take away only one thing from this review, make it this: you will not be disappointed with this movie. This is a prime example of what every successful blockbuster should be: it’s thrilling, surprising, emotionally devastating, eye-popping, and a slam-bang exhilarating ride. What does this movie get right? Just about damn near everything.

Many have been waiting a decade for the Marvel Cinematic Universe to come together in a spectacular fashion, so this review will be purposely vague as to remain spoiler-free.

The film opens where “Thor: Ragnarok” left off and what follows is 150 minutes of pure unabashed fun. As per usual, the fate of the universe is at stake and it’s up to a menagerie of superheroes to join as one to save it (finally they’re working together). Seeing the parade of comic book superstars is electrifying in its own right, but the fact that this massive puzzle has been meticulously assembled in a manner where everything falls into place is an impressive achievement.

Characters cross over from different Marvel branches and mix and mingle with a casual effortlessness, seamlessly entwined while still remaining true to themselves. There is an abundance of characters and loads of intersecting storylines going on all at once, yet the film never feels too bloated. The rapid pacing and unexpected pairings keep things interesting. The individual character traits remain intact, yet they form a cohesive bond when working together. Not one Avenger overstays their welcome. This movie works, and it works on all levels.

The film has Marvel’s recent trademark humor, but here the banter feels organic and unforced. The jokes are actually funny and (unlike other recent outings) not at all distracting. Everything feels natural, from a couple of hilarious macho ‘meet cute’ introductions to the requisite Stan Lee cameo. It’s obvious the actors are having a blast playing off one another and critically, the movie doesn’t forget to have fun.

Another strong element of the film is the real sense of danger that appears in the form of one of the best screen villains in recent memory, Thanos (Josh Brolin). The Avengers face a constant threat from this menacing warmonger who, along with his band of minions, rampage through the universe leaving piles of bodies and destruction in their wake. It’s a dire situation that feels disturbingly real, and no one is safe from harm.

The cast of accomplished actors (including Robert Downey Jr., Tom Hiddleston, Chris Hemsworth, Chris Pratt, Chadwick Boseman, Scarlett Johansson, Mark Ruffalo, Elizabeth Olsen, and Chris Evans, among many others) all bring an effective passion and humanity to their characters with a meaningful rapport. What an absolute pleasure it is to see a big-budget superhero movie come out of Hollywood that shies away from the usual cacophony of visual noise, and instead chooses to focus on real human emotion.

In the interest of preserving the unspoiled discovery for other fans, I won’t confirm or deny that there may or may not be a major death or deaths. My advice is to stay off the internet, avoid Twitter, and watch out for those trolls who relish in ruining this film for others. I will warn you: the story wanders into the darker spectrum of mainstream superhero movies, but I was riding the emotional rollercoaster for over two hours. I didn’t want the movie to end.

The film isn’t without its share of loose ends (there are plenty) and cheap fakeouts (that most modern moviegoers should come to expect by now) and the cliffhanger ending is sure to spark many a late-night fanboy debate. What is certain is that this movie is going to cause rabid mixed reactions which could range from pure anger to uncontrollable sobbing to absolute shock. I have my own theory about what’s going on here, and so will you.

I can count on one hand the number of big-budget action films that have succeeded in completely satisfying me but also left me longing for more. “Avengers: Infinity War” is that very rare breed, a highly-anticipated movie that hasn’t been oversold by its marketing. ‘Go Big or Go Home’ might as well be the film’s tagline, and finally Marvel brings it. This is spectacular entertainment and one of the best movies I’ve seen this year.

Be sure to stick around for the stinger after the final credits. You’ll be treated to what is arguably the very best final line ever spoken in a Marvel movie.